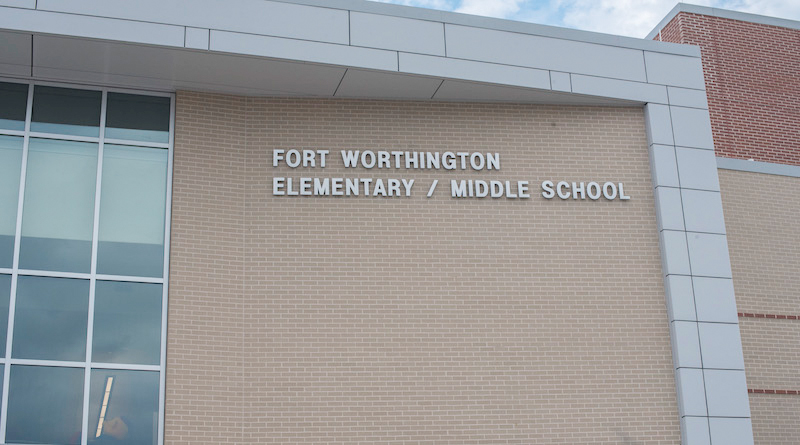 BALTIMORE — Construction on the Fort Worthington Elementary/Middle School in Baltimore reached substantial completion in August, with a ribbon cutting held on Aug. 23, just in time for the first day of school on Sept. 5. The new facility replaces the old Fort Worthington Elementary School, previously located on the same site. The design was developed to meet the new educational specifications of an expanded population of grades K–8. The completed product of the new school provides a cost-effective, energy-efficient and safe facility to meet the school’s needs.

Calverton, Md.-based Grimm+Parker served as the architect on the project, with the local offices of Gilbane Building Company serving as the general contractor. The 103,365-square-foot facility has a capacity to hold 700 students and was completed with a budget of $37 million. Design of the facility took place between October 2014 and January 2016, with the start of construction in May 2016.

All classrooms are equipped with several technology features including short throw projectors, which will have an input station located behind the teacher’s desk that allow for various inputs including computer, document camera and USB devices. Sound enhancement systems are installed in each classroom, which include a wearable microphone for teachers as well as a handheld microphone for students and guests. This system also can be integrated with hearing impaired devices.

The “cafetorium” can hold 400 students at a time, with three lunch periods to accommodate the entire student body, and is equipped with projection screens and projector for presentations and events. Sound-dampening devices were installed to reduce sound transfer to other spaces in the school, to maintain as peaceful a dining and school environment as possible. Fort Worthington is a project-based school, and as such, the tech lab is fit out with laboratory casework, power reels in the ceiling, and electrical fit out for fabrication equipment such as 3D Printers, CNC machines and saws. The school grounds include a playing field, an outdoor basketball court, two playgrounds as well as parking.

Additionally, the school includes community learning and meeting areas, flexible office spaces, and mental health and personal care facilities. The building is Wi-Fi enabled and has a cell phone and emergency repeater system — a distributed antennae system (DAS) — to allow for communication in the event of an emergency. In addition, the building is configured in a way that it can be used as a FEMA shelter after an emergency.

The building was designed to meet LEED Silver requirements. In addition to having LED lighting throughout the building, the new facility possesses bioretention facilities to provide stormwater management and educational opportunities. There is high albedo roofing throughout the complex to reduce urban heat island effect, as well as roof equipment located in such a way as to allow space for solar panels in the future. Daylight harvesters are used to reduce the output of the light fixtures near the classroom’s windows. On bright days, these fixtures can be dimmed, and all classrooms are equipped with manual shades to permit low-light instruction.

All classrooms are heated and cooled by variable refrigerant flow (VRF) systems, which allow the units to scale power consumption to the needs of the space. In addition, each classroom has a dedicated outdoor air system (DOAS) which brings in semi-conditioned fresh air into the space. High-efficiency mechanical systems were installed to transfer heating and cooling energy between rooms, and low-flow plumbing fixtures were installed throughout the facility for reduced water consumption.

“Fort Worthington is the first of approximately 22 schools that will be newly constructed or modernized in Baltimore under the 21st Century Schools Program,” said Paul Bradshaw, principal architect at Grimm+Parker. “The school represents the commitment of Baltimore City to the design of schools based on the leading edge of technology and sustainability, principles of student engagement and collaboration that serve as community hubs and foster community engagement.”