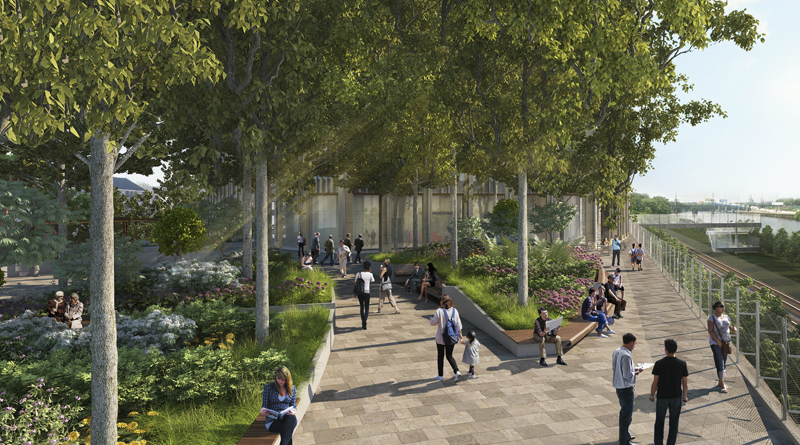 PHILADELPHIA — The first building for the new Children’s Hospital of Philadelphia (CHOP) campus — the Roberts Center for Pediatric Research — is nearly complete, with all site work projected for completion by July 31. The new building has a number of sustainable features that will earn it LEED Silver status, with certification projected by December of this year.

The Roberts Center for Pediatric Research consists of 466,000 square feet of clinical research and office space, and was designed by project architect of record Ballinger in Philadelphia and design architect Pelli Clarke Pelli in New Haven, Conn. L.F. Driscoll out of Philadelphia and Tischmann based in New York are the general contractors on the project. In addition, Cooper Robertson in New York has planned and designed the public areas of a new 8.5-acre clinical research campus. The master plan for the location of the campus directly across the river from the Children’s Hospital of Philadelphia’s main campus has created a “flexible phasing framework for long-term development of up to 2 million square feet of clinical research uses,” according to Cooper Robertson partner Donald Clinton, AIA, MRAIC, LEED AP. The planning phases for the entire campus began in 2012, and the construction began on the Roberts Center in 2015.

A major part of the project’s targeted LEED Silver status is the design plans for the building site itself, which include the collection, conveyance and retention of 85 percent of the stormwater that hits the site. The design includes cutting-edge resiliency practices to protect against storm-water and flooding through a combination of green roofs, rain gardens, and underground cisterns that are expressed as landscape features, according to Clinton.

“Because we are on the river, we are vulnerable to flooding,” said Clinton. “One of the things we needed to do is to get building above the flood level.” In terms of stormwater management, the building being located on the river — though making the campus more vulnerable to flooding — also allows for sending stormwater directly into the river without having to put it through the sanitary sewer system. “We have a combined sewer outfall that historically ran through the site,” said Clinton. “The challenge for us was to size the stormwater system so we could send it out through that outfall.”

The Roberts Center employs a chilled beam MEP system for heating and cooling. Final energy modeling tests are currently being conducted on the system, which are demonstrating excellent efficiency for this choice. “The design team considered the use of sun shading for the building, but in the end found the use of daylighting to be the best choice for the building,” said Clinton.

“We have a very open office environment with great views and tall ceilings, so we will receive a high score on that front,” said Clinton. Additionally, the site is seven minutes from a commuter rail station, is on a bus line and is walking distance to many nearby locations. The building was originally a former industrial site — an abandoned munitions building that had been sitting vacant for years, according to Clinton. The project earned “green” points by taking this old site and turning it into a useable part of the city.

From an aesthetics and design perspective, the design team had a goal of the building fitting in with the surrounding neighborhood as much as possible, according to Clinton. “The Roberts Center is a tall building in a low-rise neighborhood. We wanted to make the building feel like a good neighbor to those in the surrounding community,” said Clinton. Terra cotta was chosen as a material for the color palette on the outside of the building, and brick “to pick up on that color and fit in with the buildings around it.”