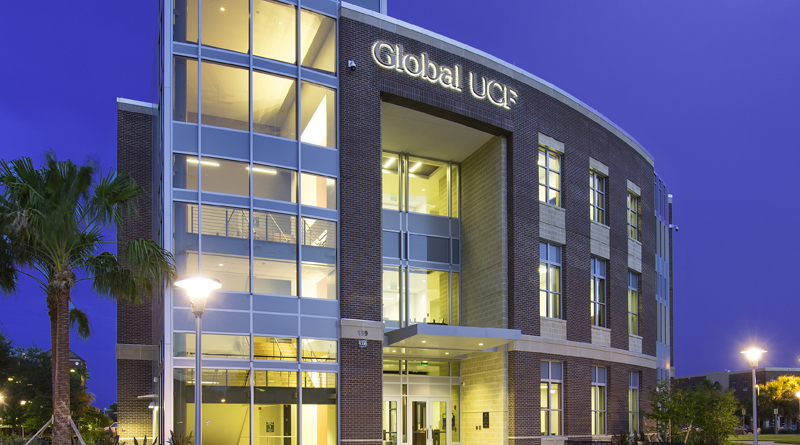 ORLANDO, Fla. — The Global UCF Building for the University of Central Florida in Orlando was awarded the 2017 LEED New Construction (NC) Project of the Year Award by the USGBC in central Florida on March 4. The UCF building was awarded LEED Gold status for its innovative planning, design and sustainability for this building that now serves as a home for the campus international community.

The three-story, 54,780-square-foot Global UCF building had a budget of $12.7 million, with SchenkelShultz Architecture in Orlando as the architectural firm on the project, and Clancy and Theys in Orlando as the general contractor. TLC Engineering for Architecture in Orlando was the MEP Engineer that consulted on sustainable elements of the design. The original project goal was LEED Silver, but the energy saving design solutions of the design team landed them with LEED Gold once the project was complete.

From a “sustainable sites” standpoint for LEED certification, the building earned points for transforming what was once a parking lot into the building site, according to Cathy Roche, associate principal at SchenkelShultz, who served as the project manager on the Global UCF building. Another sustainable feature of the UCF building was a chilled beam system as the primary method of cooling the building, which means four-times more efficiency than traditional means of air distribution. The building earned all four points for water use reduction with low-flow toilets, urinals, sinks and showers. The building also earned credits for water efficient landscaping by using reclaimed water for landscaping.

LED lighting was installed throughout the building, and low-emitting materials were used throughout the project. The building also earned credits for being pedestrian and bike-friendly, and is close to public transportation, according to Roche. “The university has their own department and sustainability goals. The university didn’t want to get credits to just for the sake of credits — they were looking for what would be the best value for the university overall in every sense of the word,” said Roche.

Along those lines, in some cases the goals for sustainability served a dual purpose for the building and those using it, said Roche. For example, the chilled beam system was installed in an effort to save energy and money for cooling costs, but in the end, it also served the teaching staff and students in terms of creating an “exceptionally quiet space” for teaching and learning. Similarly, the windows were made of low-E glass with a light grey tint for its energy saving features, but were also chosen to match the other windows in other buildings on campus.

From an overall design perspective, in addition to the 50 classrooms that were distributed throughout the three-story building, computer lab, testing lab, and a “large multifunction collaboration lab,” the design team made sure to create a “collaborative” atmosphere on the first floor. The building was designed along a main concourse which became “like a living room for the students,” according to Roche, with little zones, nooks and breakout spaces where students can gather and collaborate. “UCF as a university understands that a lot of student life happens right outside the classroom, so we made a real effort to design the concourse space to support that.” Additionally, three of the classrooms on first floor across from commons area grouped together with operable stacking partition walls so that there can be a large space available for up to 300 people to gather when needed.

“The project as a whole was really successful in so many ways. It not only served a unique group of international students and faculty, but for it to achieve this gold certification when this was not even a requirement — that was quite the achievement,” said Roche. “We needed to create a space for these students that was engaging and had a sense of collaboration, and we were always pushing ourselves to the next level with the project. This LEED Gold certification is excellent proof that we were successful,” she said.