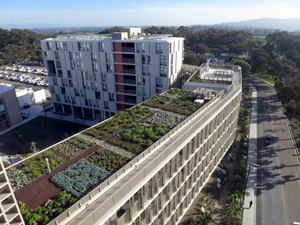 SAN DIEGO — The University of California at San Diego (UCSD) recently received a LEED Platinum certification for its new Charles David Keeling Apartments, which are named after the scientist who initially alerted the world to the possibility of global warming, after developing the first instrument to measure levels of carbon dioxide in the atmosphere. The architect on the 159,600-square-foot project was Philadelphia firm KieranTimberlake and the construction manager was Swinerton Builders, out of San Francisco.

The apartments are located in the Revelle College area of campus, which is fitting, as Keeling was a prominent protégé of Roger Revelle, who founded a program to measure carbon dioxide levels at the Scripps Institution of Oceanography and appointed Keeling to head it. Keeling made his historic discoveries while working at that position. Revelle later went on to be one of the instrumental figures in the formation of UCSD; now the pair have been immortalized in the oldest section of the campus.

It seems very likely that Revelle and Keeling would be proud of the new building, as it has transformed the entire rainwater and runoff management system in the surrounding area, replacing a culvert system that sent water down to the coast unfiltered with a new series of bioswales and arroyos that naturally filter the water before returning it to the Pacific Ocean.

The $50 million apartment complex was designed to operate in an extremely green manner and to make its green functions very visible to students in their day-to-day lives. The complex consists of two large towers connected by a shorter, longer structure, which forms a large C-shaped complex with the open end facing inland.

Water management is a cornerstone of this project. Water from showers and sinks is collected in the basement of one of the towers and used to recharge the water table in the winter and irrigate plants in the summer. The complex uses a scaled-down version of the bioreactive filter systems employed by some water treatment plants to purify the water to a level where it is just below drinking water standards. Some of that water is used to irrigate a green roof on top of the shortest structure, which provides additional insulation and improves the performance of the building envelope.

The landscaping and green roof and water management systems were designed by local San Diego firm, Spurlock Poirier Landscape Architects. Marty Poirier, a principle at the design firm, explained the green roof was placed on the shortest building so students in the larger buildings could enjoy it. A walkway runs along the edge of that structure, allowing students to get an up close look at the green roof and also enjoy views of the ocean. A patio area with lounge chairs allows students to hang out in the area as well. The roofs of the taller buildings are also being used for green purposes, with solar arrays installed and maintained by San Diego Gas and Electric, which is leasing the roofs. This means the university can enjoy discounted energy rates without being responsible for upkeep of the equipment.

The project takes storm water management to the next level and creates a practically seamless mesh between the structure and landscaping, with arroyos featuring rock patches and mulch running underneath overhangs at the edge of each building. The arroyos transition into bioswales populated by native plants, which absorb water and filter it naturally. The water filters down into a grating system in a courtyard at the center of the “C.” The courtyard doubles as a location for students to hang out and the low point where water from the buildings, natural features and nearby parking lot converges. The lawn was built at an angle to funnel water into a graveled area with additional plants. The water then filters down beneath the buildings where a culvert directs the naturally filtered liquid to the Pacific Ocean.

Poirier explained the overwhelming trend of the 20th century was for city planners and building designers to hide infrastructure life runoff management systems. He said this combined with the small amount of rain in Southern California created a disconnect between people and the natural water cycle. He explained that trend was beginning to reverse now and even some urban areas were beginning to direct stormwater to aboveground planters rather than underground pipes that dump it into the environment unfiltered.

Poirier added that, “The campus architect, Boone Hellman, challenged us all to use the campus as an experimental tool.”

One of the ways the landscape team did that was to create this water system that not only provides better stewardship for the environment but also lets students see that.

He said the goal was to “make what had been invisible visible and reveal the tremendous amounts of water that we get during storms even though San Diego is a coastal desert. We get only nine inches of rain per year, but it comes in pretty strong doses and we really wanted to allow the students, faculty and staff on campus to be delighted with the presence of this rainwater moving through these man-made channels and naturalized rock and bolder arroyos.”

In addition to utilizing and managing rainwater to the highest extent, the structure was designed to capture the ocean breeze to help cool the building. The university’s housing and dining services executive director Mark Cunningham explained UCSD refrains from using, or even installing, air conditioning in any of its buildings, meaning optimal building envelopes and airflow use are essential.

The project also features a one-of-a-kind shade system, which employs fiberglass grating pieces usually used on the deck of aircraft carriers. The super strong material can absorb the impact of landing airplanes and also resists the negative effects of salt water, making it ideal for seaside communities like San Diego. The grating pieces provide a dual function, as they provide shade for the buildings but don’t restrict airflow.

“You can imagine if those were solid pieces there would really be no airflow. By using that fiberglass mesh system, the air can actually blow through to cool the building, while shading it as the sun goes along.”

Cunningham explained the green design of the structures on campus was good for the environment and also served as a major marketing tool for the university. He added that 90-92 percent of students accepted at UCSD were also granted admission to UC Berkeley and UC Los Angeles. Cunningham said the lack of comparable sports programs at UCSD made the green campus even more important as a selling point for the university.

The tactic seems to be working, as Cunningham explained, “We sold all 515 beds in less than an hour.”