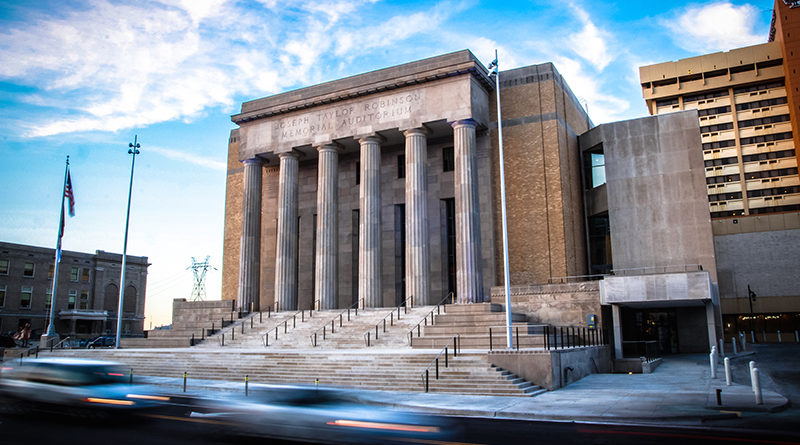 The $70 million renovation project’s design team consisted of New York-based Ennead Architects and locally based Polk Stanley Wilcox. The project upgrade enhanced acoustics, upgraded technology and added new interior finishes to the iconic performance hall and conference center. Achieving LEED Gold certification this past August, the redesign was also a sustainable solution that not only brought the community facility up-to-date, but also maintained its historic charm. Green Building News spoke with John Mayner, CDME, vice president marketing and communications for the Little Rock Convention & Visitors Bureau, about the project and the best practices involved when a community decides to revitalize a facility of this nature.

Q: What prompted the renovation of the Robinson Center?

Mayner: As a 1939 Works Progress Administration structure on the National Register of Historic Places, the Robinson Center had many deficiencies, so in October of 2011, the Little Rock Convention and Visitors Bureau (LRCVB) impaneled a concept team to research and report back to us whether or not the current structure was salvageable. [That included] evaluating all aspects of the existing facility, researching user needs, proposing conceptual solutions and estimating the cost and construction schedule of the proposed additions and renovations. Obviously, both performance hall and meeting space needs had changed a lot since 1939.

In June of 2012, they finished their report and thought that completely reimagining it provided the best solution possible. Not only would redesign be the most sustainable solution possible, but it would prove to be the most cost-efficient one as well. Additionally, recognizing [the building’s] connection to the city and our residents was also very important to us because it was a structure that many residents had a direct connection to.

Q: What are the major design elements included in this renovation?

Mayner: As I had mentioned above, the Robinson’s renovation, restoration and expansion was truly a complete reimagining of the historic structures architecture and interior spaces/flow. Although technologically advanced when it originally opened — it was one of the very first public auditoriums in the south to feature air-conditioning — it’s original design, although “forward thinking,” was beyond antiquated, as were its original systems for both its performance hall and meeting needs. Case in point, the original auditorium was on the top two levels — a long, narrow rectangular box that was far from ideal acoustically — and the most meeting/convention space was below and windowless, which was also far from ideal by today’s standards/needs, and not the type of space groups are looking for today.

Q: What were some of the key sustainability elements involved in the project?

Mayner: LEED-certification highlights include water-use reduction that exceeds the current state minimums by 37 percent as well as energy-use reduction, exceeding the current state minimums by 32 percent. Also, 57 percent of building material used in the reconstruction of Robinson Center were extracted and produced within 500 miles of the project site, and building materials used in the reconstruction contain 39 percent recycled content. Lastly,

LRCVB made a two-year commitment to purchase 70 percent of the building power from Renewable Power Sources, and has established a sustainable purchasing program for evaluating all future Robinson Center purchases of goods and supplies.

Q: What has been the public response to the new Robinson Center?

Mayner: What you never know for sure when you begin a project like this is what the public response and support will be at the outset and what the demand for your space and/or partners will be. If you go back to the LEED-certification announcement, what you’ll see with this structure’s reimagining is that our performing arts partners that use its beautiful, state-of-the-art, multipurpose performance hall have seen significant increases in their season ticket sales and attendance in this inaugural year of being open, and with its renovation, more and more acts who might have overlooked are city before are now booking it.

Secondarily, demand for the new two-story, glass-and-steel conference center addition, located on the northern side of the building with its stunning 5,500-square-foot terrace overlooking the Arkansas River has also been great, and it did not come at the expense of our Statehouse Convention Center, which is also having a phenomenal year attendance-wise. We are thrilled with this response.

Q: What are you most proud of with the completion of this project?

Mayner: Well, it’s hard to say just one thing. But saving and reimagining one of the city’s most iconic historic structures for future generations to come is something we’re very proud of, and with its LEED Gold certification, we exceeded our original expectations for what rating we could achieve this project. Finally, seeing the interest and demand for both its conference center and performance hall validates our initial decision to save this iconic structure rather than tear it down — and that has also proved to be very satisfying.