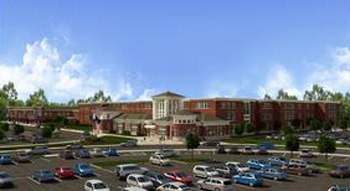 FRANKLIN, Mass., — Administrators at Franklin High School, in Franklin, Mass., are excited about their new school building, which is currently under construction on the same campus as the existing structure. The new building will be significantly greener and more efficient than the current one.

The new facility is sorely needed, as the school was placed on warning status by the New England Association of Schools and Colleges (NEASC) in 2008 because of inadequate “community resources for learning.” The NEASC is the accrediting agency for the school, and its experts voiced concerns about the school’s current facilities for several years before it was finally placed on warning status. The agency noted problems with the science labs and electrical systems in addition to a lack of access in terms of Americans with Disabilities Act requirements. The school expects to be taken off of warning status when the new structure is completed in the fall of 2014. The old school will be demolished between that time and the beginning of the following school year, and new athletic fields will also be completed during that period.

The school selected a model school design from Wayland, Mass., architect firm Ai3. Nearby Whitman-Hanson and Plymouth North high schools were built using designs based off of this same model. Agostini Construction Co., of East Providence, R.I., will serve as the general contractor.

The project is expected to cost $104.5 million, with the town of Franklin paying approximately $47 million and the rest being funded by the Massachusetts School Building Authority. Local residents approved the funding in a March 27 vote, clearing the way for construction, which began in October.

James Jordan, lead designer on the project, explained some of the features of the planned structure at a public meeting held by the School Building Committee in November.

The 306,500-square-foot structure will aim for a LEED Silver certification from the U.S. Green Building Council. Jordan estimated the new school would be over 20 percent more energy efficient than the current building and would save 600,000 gallons of water per year, by using a rainwater collection system for greywater. The roof will be built to support a solar panel array. The building will take better advantage of the external environment with improved insulation and more advanced daylighting strategies than the current structure. There will also be more recycled construction materials and less substances with volatile organic compounds, which are chemicals that can leach out over time, like how the plastic from a water bottle reacts when placed in a microwave.

The new classrooms will feature Wi-Fi Internet access and interactive smartboards. The library will double as a bookstore-style Internet cafe, with some dining functionality, and a station where students can borrow laptops.

The school will be equipped to produce and display video productions with a 4,200-square-foot broadcast studio, complete with sound and video editing rooms, and an 851-seat auditorium. The auditorium will be also be prepared for live performances and will feature an orchestra pit.