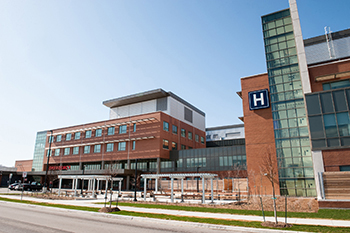 MARKHAM, Ontario — The Markham Stouffville Hospital has received LEED Silver certification on its new 385,000-square-foot expansion. The original building, Building A, which was opened in March 1990 also received upgrades such as new floors, windows and paint. The existing patient rooms were equipped with hand washing stations as well as new private bathrooms and medical charting technology closer to the beds.

The addition of a second building doubled the size of the hospital. PCL Constructors, Canada Inc. worked with B+H Architects to expand and enhance lab space to allow for more automated test results. Together the companies transformed the old Emergency Center into a new Cancer Center and designed two sets of operating centers. Building A has been designed for one-day procedures and includes 6 new operating rooms. Building B has 10 new operating rooms that have been reserved for larger and more serious cases. This new space has the ability to use minimally invasive technology for surgeries.

The new building will be a “calm, simple building without a lot of details,” said Suman Bahl, vice president of corporate services and capital development at Markham Stouffville Hospital, in a statement. The $400 million project was able to recycle 90 percent of the waste created by construction. PCL Constructors was able to divert the waste, such as concrete, metal, wood and drywall from going to landfills by using it in different parts of the hospital.

Construction, which began in December of 2010, was finished on August 20, 2014. Due to the process of obtaining LEED certification, the hospital was not certified as LEED Silver until a full year later. Some of the components added to the facility to help with the certification were a white roof membrane and green roof areas, exterior lighting designed to minimize light pollution and the installation of low-flow fixtures to reduce water usage throughout the hospital. Mike Wieninger, Vice President and district manager for PCL Constructors Inc. said, “By nature, hospitals require more air exchanges and water than typical buildings, making them more sophisticated to construct sustainably.” By installing the low-flow fixtures, PCL Constructors and the Markham Stouffville Hospital are going to be able to save 40 percent on water usage.

Markham Stouffville Hospital will be the first hospital in Ontario to build a central utility plant that supplies thermal energy, electricity and emergency power through the Markham District Energy, which will save them an estimated 37 percent on energy.

The hospital also wants to inform their staff on the importance of sustainability and what they will be able to do to help with energy savings. The former Intensive Care Unit has been converted into a learning center for the staff and is connected to the city’s Cornell Community Center. The staff at Markham Stouffville Hospital are still getting used to the new system and ways that they can achieve maximum efficiency.

While planning and building the new expansion the goal was to balance energy efficiency, patient comfort, and a healthy work environment. Bahl said, “We are proud to deliver on our promise of a green building as part of our pledge to provide enhanced care and a state-of-the-art work environment.” By building the expansion by LEED certifications, they were able to achieve the sustainable and comfortable environment they aimed for.

This article was originally published on HealthCare Construction + Operations News.