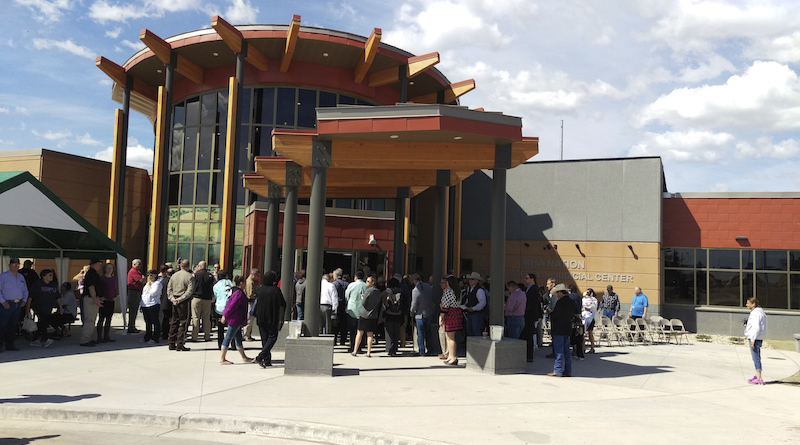 NEW TOWN, N.D. — The opening of the MHA (Mandan, Hidatsa, Arikara) NATION Public Safety and Judicial Center in New Town on May 9 marked the completion of the much-anticipated facility. The new energy-efficient center features 60 geothermal wells in addition to numerous other energy-efficient features, and creates a permanent home for law enforcement and the courts system after 60 years of transient moves forced by Army Corp flooding of the Elbowoods Community during the 1950s Missouri River Dam projects. The new judicial center will house the offices of the tribal law enforcement, court services and outside agencies to serve the MHA NATION in New Town and surrounding areas.

The judicial center is Phase II of a three-part justice complex. Phase I included a 61-bed correctional facility completed in 2004, and Phase III will be a juvenile-attending care facility, slated for completion by fall 2018. The new 29,600-square-foot judicial center had a budget of $17.2 million, and includes 33 offices, a ceremonial rotunda, law enforcement center, three courtrooms and an Enhanced 911 (E911) Call Center with six dispatch stations. The facility has two short-term holding cells (three beds total) in the law enforcement center with a common day area and one holding cell for in-custody detainees waiting for court appearances (no beds).

Additionally, there is 3,000 square feet of public spaces including the lobby and waiting rooms, as well as 83 security cameras with face recognition technology, and all doors are secured with access control technology. Nelson Tremain Partnership Architecture and Design in Minneapolis served as the architect on the project, with Capital C Construction in Bismarck, N.D., serving as the general contractor.

MHA NATION — also known as the Tribal Business Council and the Three Affiliated Tribes — are the owners of the project and were actively engaged as part of the project team. The new judicial center is the first one built on any reservation or trust land funded entirely by the tribe without federal cost assistance, according to Randall M. Lindemann, architect in charge at Nelson Tremain Partnership. The tribe paid for the project entirely through the revenue that came from the Bakken Oil Field that underlies parts of Montana, North Dakota, Saskatchewan and Manitoba, and on which the reservation is built. The tribe decided to use those dollars to build important community-based infrastructure projects, including the judicial center, according to Lindemann. This is the first time in MHA NATION’s history that it owns a facility of this magnitude.

The justice center was designed to exceed by at least 30 percent the ASHRAE 90.1 (2004) energy standards and requirements, and the thermal envelope of the building was designed to exceed the 2009 IECC code, according to Lindemann. The facility was built to meet LEED Silver standards, though the project team will not be applying for certification. The facility has a building automation system that allows the building to monitor and optimize energy performance, set space temperatures and lighting levels to help remotely troubleshoot problems and to gather and store operational data for trending.

Redundant geo circulation pumps — a central heating and cooling system that transfers heat to or from the ground — has been installed, and has been sized at 100 percent of the total system flow and pressure, which allows for alternating use of the pumps. “By installing two pumps, we have redundancy backup in case one pump fails or needs service,” said Lindemann. “More importantly, we can cycle the pumps for efficiency and service life longevity.”

Additionally, redundant condensing back-up gas boilers that are rated at 90 percent Annual Fuel Utilization Efficiency (AFUE) have been installed into the building, significantly more efficient than standard boilers normally rated at 70 to 75 percent AFUE, according to Lindemann.

The facility has an energy recovery system and Dedicated Outside Air System (DOAS) with indoor air handling to eliminate rooftop equipment exposed to extreme weather and temperatures that are so prevalent in the North Dakota climate, according to Lindemann. Additionally, an emergency generator sized for on-site power generation will support the entire facility when utility reliability is low or there is a loss of power for extended periods of time that would otherwise cause hardship to the facility, according to Lindemann.

There is LED lighting throughout the facility with occupancy sensor lighting controls. Exterior lighting is controlled through a photocell and time switch combination, and the facility’s use of natural light reduced its dependence on artificial lighting by 60 percent. There are active sunshades and canopies on all south- and west-facing windows and doors, and ultra-low flow plumbing fixtures throughout the facility, according to Lindemann.

“We made extensive use of north-facing clerestory windows for natural daylighting in interior spaces such as the courtrooms,” said Lindemann.

Read the full article in the July/August issue of Correctional News.