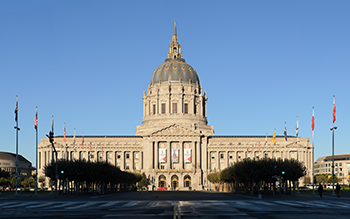 “San Francisco has long been a leader and innovator at the forefront of solutions to combat climate change, and reduce energy and water consumption,” McCarthy said in a statement. “As the entire nation watches California endure its fourth year of drought, we all must do our part to use renewable energy, be energy efficient and conserve our precious water resources.”

San Francisco’s City Hall was built in 1915 and received its rating in the Existing Building Operations and Maintenance (LEED-EBOM) category. The building’s status came after joint efforts by the San Francisco Public Utilities Commission (SFPUC), the City Administrator’s Office and the EPA, which provided a $700,000 grant to upgrade the toilets and urinals to high-efficiency models. Toilets and urinals at other city civic buildings also are being upgraded.

San Francisco City Hall is more energy-efficient than 90 percent of similar buildings across the country, according to McCarthy. City Hall has a 100 percent greenhouse gas-free electricity supply from the SFPUC’s Hetch Hetchy Water & Power System, a publicly owned system that is maintained with local financing. New water-efficiency upgrades are estimated to save roughly 825,000 gallons of drinking water per year. San Francisco Public Utilities Commission electric ratepayers funded the operational and energy efficiency upgrades.

Additionally, a newly reconfigured ventilation and heating system monitors temperature and carbon dioxide levels. The system circulates fresh air when a room is filled with people and cools the building.

“San Francisco City Hall is a world-class building with a storied history for trailblazing policies that have had a global impact,” said San Francisco City Administrator Naomi Kelly in a statement. “As we approach City Hall’s centennial celebration, City Hall today makes history again as the oldest U.S. building to achieve LEED-EBOM Platinum certification, the hallmark of sustainable building design.”

“San Francisco is pioneering sustainability for the rest of the world by demonstrating how cities can transform historic areas like our own Civic Center into sustainable resource districts through the use of advanced energy efficiency and water conservation technologies,” Lee said in a statement. “This investment in the first-of-its-kind Civic Center Sustainability District will create a model for the nation in building greener cities.”