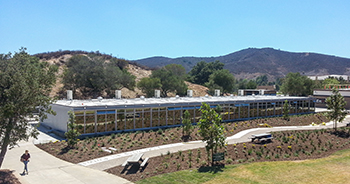 The $2 million re-locatable classroom project replaces six 25-year-old temporary classrooms at the high school with seven permanent classroom buildings, according to Balfour Beatty Construction of Dallas, which built the school. The 960-square-foot buildings were designed and fabricated by GrowthPoint Structures, based in Santa Monica, Calif., and are made from single-use shipping containers. The buildings achieve net-zero energy consumption, save 115 tons of landfill waste by using 85 percent reclaimed material and, use high-performing and energy-efficient systems that reduce monthly utility costs. Each building features full LED lighting, ductless HVAC systems, floor-to-ceiling windows, and solar panels classifying the buildings as “ultra-green” and automatically qualifying for 37 LEED credits or 42 CHPS credits.

“Balfour Beatty Construction has been instrumental in the successful implementation of sustainable solutions such as the net-zero classrooms for this project, in addition to other solutions that have saved energy and money on several other modernization projects we have done together,” said Dr. Tony Knight, superintendent, Oak Park Unified School District (OPUSD), in a statement. “They have great expertise and a shared commitment to protecting our natural resources, and at the same time creating a healthier and more productive learning environment for our students.”

Balfour Beatty previously helped OPUSD receive additional sustainability awards, including “Green Ribbon” recognition from the U.S. Department of Education in 2013 and a Green School Leadership Award, which was presented at the Green Schools California Summit in 2011.

“Our team is thrilled to have helped OPUSD achieve this recognition from the USGBC,” said Brian Cahill, president of Balfour Beatty Construction’s Southwest Division, in a statement. “In addition to its many sustainable benefits, this project offers students a unique education tool as each container has a permanent tag indicating the various countries it has visited, which is incorporated into a learning program for the students. We also completed this project over the summer, in less than 90 days. The team accomplished this fast-track schedule through collaborative leadership and lease-leaseback delivery, which provides great flexibility and value for school districts. We are proud to partner with the district in our combined quest to find sustainable solutions that benefit students, our communities and our planet.”

The project is part of the Oak Park Measure R School Improvement Bond program, which voters approved in 2008. Balfour Beatty Construction has provided master planning, pre-construction and construction management with design-assist services to the district for the past six years.