ABERDEEN, S.D. — As part of its effort to shift to a new energy economy, the General Services Administration conducted a lighting retrofit of its Aberdeen building with the help of recovery and reinvestment funds — one of the administration’s only whole building LED retrofit projects selected in the country. 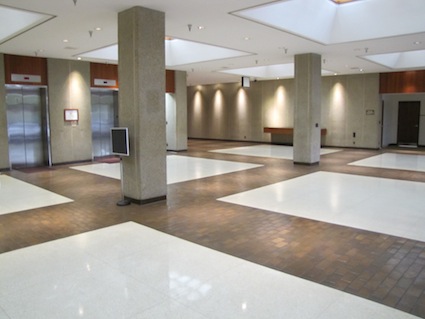 The Rocky Mountain Regional project involved retrofitting existing fluorescent and incandescent lighting with LED fixtures. More than five thousand, 48-inch fluorescent lamps were removed and replaced with new 48-inch LED lamps throughout the six-story, 210,000-square-foot building.
The retrofit also involved removing and replacing about one hundred and eighty, 60-watt incandescent flood light lamps with 30 LED lamps.
Owned by the General Services Administration, the building is home to the regional headquarters for the Indian Health Services, the Bureau of Indian Affairs, the Internal Revenue Service and the Bureau of Land Management, among other offices and workspaces.
Paid for with $466,200 of the 2009 American Recovery and Reinvestment Act funds, the project began in March 2010 and was finished in May 2010.
The retrofit is expected to save 13 percent of the building’s annual electrical cost, which involves reducing the annual lighting energy cost by half, based on the electrical use in 2009.
This lighting retrofit will be saving 268,248 kWh/yr in electricity and preventing the emission of 684,838 pounds of carbon dioxide, 1,821 pounds of nitrogen oxide, and 1,493 pounds of sulfur dioxide.
The energy saving measures are equivalent to preserving three acres of forest from deforestation or removing 57 cars from the road for a year, and saves roughly 723 barrels of oil from being burned, according to the administration.
As part of the retrofit project, the agency initiated a process to select the light color temperature for the new LED lamps through the use of a mock up study of one of the building’s conference rooms. The final color selection will be used as a basis of design for all the new lamps installed throughout the building.
Under the Buy America Act, which intends to ensure the support of domestic companies and workers, the administration chose domestic manufacturer Seesmart lighting products.
The agency has 500 green federal projects in progress or completed through the recovery act, including onsite energy generation technology, roofing projects and interior and exterior lighting upgrades.
“At GSA, we are taking a leading role in the clean energy economy, and our agency has set a goal of a Zero Environmental Footprint,” said Susan Damour, Rocky Mountain Region Administrator of the agency. “Commercial real estate accounts for nearly 20 percent of U.S. energy use, making the sector one of the biggest opportunities for GSA to curb greenhouse-gas emissions and build a 21st century clean energy economy.”