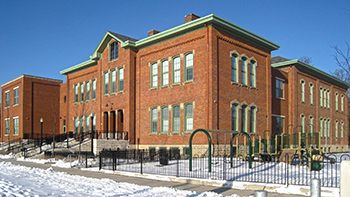 COLUMBUS, Ohio — The 142-year-old Stewart Alternative Elementary School in Columbus reopened in January 2015 after undergoing an extensive renovation. About seven months later the project’s use of green building techniques helped it earn LEED Silver certification in August 2015.
The school was originally built in 1874, with its most recent renovation completed in 1926. Although much time had passed since the school’s last improvement, the Columbus City School District had actually planned to renovate the building at a later date, but a 2010 fire required the district to update the building sooner than anticipated.
Columbus-based architectural firm Hardlines Design Company served as the lead architect on the $11.2 million project, which included a complete renovation of the existing 28,000-square-foot building and construction of a new 18,000-square-foot addition. Since the structure is listed on the National Register of Historic Buildings, the design needed to replicate the original building as much as possible.
“Windows were one of the features we used to tie the new and old structures together,” said Charissa W. Durst, AIA, Hardlines Design Company’s CEO and principal architect, in a statement. “First, we identified that multiple window types could be used, as there were slight detail differences between the standard windows in the original 1874 wing and the 1894 addition. We then required the contractor to provide custom-sized windows to fit each individual opening, which was a requirement of the German Village Historical Commission, which had to review and approve the project.”
Under the direction of Columbus-headquartered Miles McClellan Construction, glazing contractor Richardson Glass Service Inc., located in Newark, Ohio, installed more than 130 of the 3250i -XLT INvent Series high-thermal performance, simulated double-hung windows from Wausau, Wis.-based Wausau Window and Wall Systems. The windows installed in the new addition were configured in tall units stacked two-high for easy installation. Both the new and historic sections of the school benefit from the windows’ modern performance, but differ aesthetically. Reflecting a more contemporary look, the windows in the new addition do not have divided lites and were specified with square tops.
“For the historic portion of the school renovation, our simulated double-hungs are project-out units that mimic the look of traditional hung windows with arched tops and divided lites,” explained Wausau’s Central regional sales manager, Lisa May, LEED Green Associate, in a statement. “Projected windows overcome inherent issues with counter-balancing added weight of insulating glass in double-hung sash, while offering higher performance, ease of operation, and a range of glass options to optimize energy efficiency.”
Operable units also allowed for the opportunity to include natural ventilation in the school. Integral between-glass blinds minimize maintenance, while managing light and glare. “Having operable windows was very important to the staff,” Durst said in a statement. “Even though they knew that the new building would be air conditioned, they still wanted windows they could open on nice days.”
In a statement, May added, “Natural ventilation, sunlight and outdoor views have been shown to benefit students and staff, and are associated with lower absenteeism and higher morale. Wausau’s windows help create a quiet, comfortable learning environment for the students to concentrate and listen to their teachers. All of these attributes support the school’s LEED goals and contribute to the students’ potential achievements.”
Apart from the new lighting elements, the building contains the school’s first-ever gymnasium. (Prior gym classes were taught in the cafeteria or at a nearby city park). Other new spaces include a media center, computer laboratory, cafeteria and classrooms for up to 350 students. Every classroom is outfitted with wireless technology, and the entire building is now air-conditioned.
The exterior of the school also includes playgrounds, new green space and new on-site parking. To make this and the school’s expansion possible, the school district had to acquire a nearby property to double the size of the lot to nearly 2.5 acres.
This article was originally published on School Construction News.