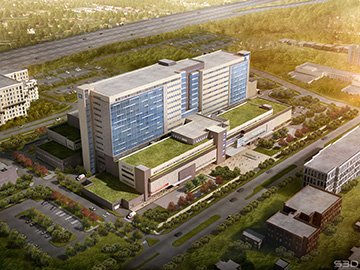 TORONTO, Ontario — The Humber River Hospital in Toronto opened on Oct. 18 to make it the first fully digital hospital in North America. The new, 1.8 million-square-foot hospital now has state-of-the-art-medical equipment, which was designed to improve patient care. The hospital will be able to serve more than 850,000 people from the Toronto area in the new facility. About 350 patients were moved to the new hospital, according to a statement from Humber River Hospital.

The hospital has features such as automated kiosks, where patients are able to enter their information to be given their medication from a robotic arm. It also features a fully digital management system that counts, organizes and checks the expiration date on all of the drugs at the hospital. This is to ensure that patients are receiving the correct treatment, said a statement from Humber River Hospital.

Humber River Hospital will hold 656 beds and have fully digital features that will provide the most advanced technology currently available. The radiology department now has robots that are able to position a patient during an X-ray procedure. This will help so patients do not have to try and follow demands, as the robot will be able to help them get into position, according to Tech Times.

In the chemotherapy department, the robots will be able to sort the drugs prescribed by doctors for the patients after checking the dosage on each of the patients. After this is finished, the medicine will be checked by the hospital staff through a barcode the robot has put on the package, according to Tech Times. A new, advanced information management system is also available, which will help with the organization and distribution of patient treatment.

Viewing the records of the patients will also be more efficient. According to Humber River Hospital, each bed will hold a touchpad where the patient is able to view their medical charts, adjust the room temperature, make phone calls, play video games or watch television. While you are able to use the touchpad at the bedside, you will also still see robots that will be delivering food and linens to the rooms.

Construction on the hospital began in September 2011 and cost approximately $1.7 billion. Although there is new technology, according to the hospital, the facility is working to remain environmentally friendly by installing a green roof and a system that decreases energy consumption, a statement from Humber River Hospital said. According to a release from the Ontario government, the hospital was designed and built to LEED standards and focuses on a healthy indoor environment.

As the move was extensive and 350 patients had to be moved, the hospital was also given the help from volunteers, outside staff and the hospital staff. In total, the move took 800 staff and volunteers and 36 different transfer vehicles. The new hospital will have an increase in capacity from 549 beds to 656, there will be expanded ambulatory, emergency and critical care services, modern diagnostics equipment to enable a more detailed and accurate diagnosis and treatment and updated infectious disease control systems to monitor and prevent infections, according to a news release from the Ontario Government.

This article was originally published on HealthCare Construction + Operations News.