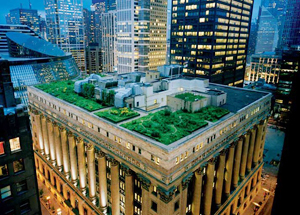 LOS ANGELES — In a new study by the Natural Resources Defense Council (NRDC), they have found that installing green roofs and cool roofs in southern California could save consumers more than $211 million in energy bills and reduce emissions equivalent to removing 91,000 cars from the road each year.

Green roofs are installed on top of buildings for many functions including production of shade, insulation and evaporative cooling that reduces temperatures on the roof surface and in the building interior below. Cool roofs are similar to green roofs — and use materials to reduce energy demand. Cool roofs use reflective materials to reflect more of the sun’s energy than dark, traditional roofs. These installations are especially important for major cities with many high-rise buildings — by reducing the temperature of the building using a green or cool roof it lowers the costs of energy use for the entire building.

“The scale of these benefits is truly impressive and justifies a much more aggressive set of policies and incentives to help advance the adoption of green roofs and cool roofs in our region,” said Cara Horowitz, the Andrew Sabin Family Foundation executive director of the Emmett Center on Climate Change and the Environment at UCLA School of Law. “If Los Angeles and other southern California cities provided better incentives for residential and commercial building owners to install green roofs and cool roofs, we would have healthier, more sustainable neighborhoods and save money too.”

Green roof and cool roofs cut urban temperatures by reducing the urban heat island effect. The urban heat island effect is essentially the temperature created from the sun barring down on traditional buildings with dark paved surfaces on the roof that attract heat to the surface of the building and radiate heat back into the air — while also heating the interior of that building. Installing green roofs and cool roofs in urban areas can help cool down surrounding neighborhoods and reduce temperatures by as much as 3.5 degrees Fahrenheit, according to the report.

The temperature generated from roofs in Los Angeles results in air pollution and thick smog. In the city the amount of smog pollution increases roughly three percent with every one degree Fahrenheit increase in temperature — the hotter the days, the smoggier the conditions, according to the report.

Green roof installations can also reduce stormwater runoff. Installing green roofs on 50 percent of the existing surfaces could reduce stormwater runoff by more than 36 billion gallons each year, according to NRDC. The Environmental Protection Agency views urban runoff as one of the greatest threats to water quality in the country, calling it “one of the most significant reasons that water quality standards are not being met nationwide,” according to the report.

The savings that these roofing alternatives offer have been proven in cities like Chicago and New York. California now has the ability to make its cities more sustainable by building more green and/or cool roofs. By installing green roofs or cool roofs on 50 percent of the new construction and redevelopment in southern California would save up to one million megawatt-hours per year by 2035 and also cut carbon pollution by 288,000 metric tons, according to the report.