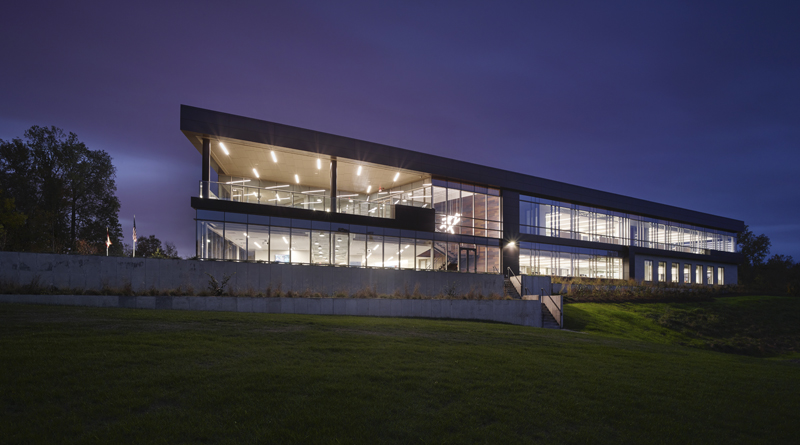 CLEVELAND — Oatey, a global manufacturer of quality plumbing products in Cleveland completed construction on its new corporate headquarters in Oct. 2016. The new headquarters located in the Emerald Corporate Park in Cleveland is notable for its energy-efficient workplace, and is tracking towards a LEED Gold certification for new construction this summer.

The 47,000-square-foot building borders the Cleveland Metroparks, an extensive system of nature preserves. Vocon was the Cleveland design firm for the new energy efficient headquarters, and Donleys Inc. in Cleveland was the construction manager for the project. This was not a traditional design-bid-build project, but instead a CM at-risk utilizing a guaranteed maximum price, according to Jodi van der Wiel, associate design director at Vocon. The budget for this project is currently undisclosed at the request of the project team.

The sustainable design elements of the new Oatey Corporate Headquarters were incorporated as a response to Oatey’s focus on and values around reducing overall long-term energy costs and water consumption, according to van der Wiel. The design team specified materials with 20 percent minimum recycled content and over 60 percent regional materials. Additionally, diversion of construction waste was identified by Oatey as an important metric to track throughout construction.

“From the outset of the design process, the focus was on Oatey’s beliefs, including sustainability, a sensitivity to the site, capitalizing on views and providing their employees with the most pleasant environment in which to collaborate,” said van der Wiel.

One example of the sustainable elements of the new headquarters that will earn it LEED Gold status include longer northern and southern facades with a shorter west side with limited heat gain, and the larger expanses with window glazing facing north. The orientation of the building allowed the design team to take advantage of the sweeping views to the park, according to van der Wiel.

In an effort to reduce water consumption, all new water-saving fixtures were installed, and the flush fixtures use rainwater captured in a cistern outside the building. Shower and changing rooms have been installed to complement the interior fitness suite as well as the walking trail that encompasses the site. One of the most significant energy saving measures is the installation of efficient HVAC with raised access flooring allowing for easy thermal comfort for each individual work area, according to van der Wiel. BAS controls and lighting controls were installed, with LED-lighting installed throughout the building as well. While the greenfield site didn’t allow for the earning of LEED points for proximity to nearby services and other amenities, it did afford the design team the opportunity to integrate stormwater and wastewater technologies into the building, according to van der Wiel.

The site also allowed Oatey to provide “healthful walking paths” that connect with nearby park infrastructure, said van der Wiel. Drought-resistant and native plant varieties were carefully chosen by the design team to complement the park and architecture. “The interior and exterior of the building were designed holistically to capitalize on views and to blend in with the landscape,” said van der Wiel. “The material palettes were intended to tie into the natural setting and to reinforce the sustainable principles with the use of bronze stone and wood to ground the building,” she said.

Additionally, the building features a 2,800-square-foot exterior porch overlooking the Rocky River Valley, which Oatey employees use for work and leisure, according to van der Wiel. There are also indoor and outdoor amenities such as cafes, a variety of individual and group work stations, a fitness suite and outdoor picnic areas next to the walking trail.