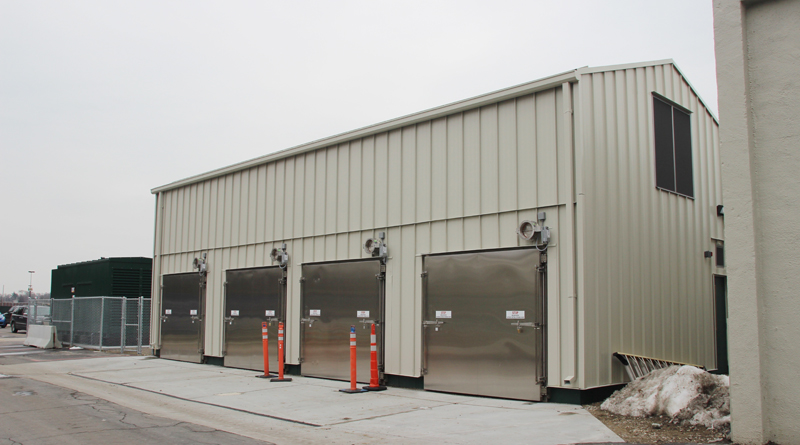 DETROIT — The Detroit Zoological Society in Detroit has built the first-ever anaerobic biodigester in North America, and is planning to use it to generate electrical power for the zoo. The biodigester functions by using animal waste from the zoo’s animals, and is currently in the testing and commissioning phase. The biodigester will be officially operational in May.

The biodigester was designed by Albert Kahn Associates, a Detroit-based architectural, engineering, planning and design firm, with Integrity Construction Services based out of Gaylord, Mich. serving as Construction Manager on the project.

It cost approximately $800,000 to build and install the biodigester, according to Alan A. Cobb, president and chief executive officer at Albert Kahn Associates. The original goal of the biodigester at the zoo was to eliminate the wasted energy used to haul the zoo animal’s waste off-site. Previously, the zoo had to manage the removal of almost 480 tons of manure annually to off-site locations for disposal, or incur the costs, according to Cobb. Now, the biodigester will independently power the Ruth Roby Clancy Animal Health Complex, the animal hospital at the Detroit Zoo. The power that this biodigester will provide will save the zoo $120,000 annually due to energy savings.

The biodigester is like a “mechanical stomach,” according to Cobb. The animal waste is fed into the biodigester, which is broken down by bacteria in an anaerobic environment, and produces a renewable energy called biogas (methane and carbon dioxide). The biogas is then converted to electrical power. Anaerobic digesters, both wet and dry, (this one is a “dry” variety) are more commonly used on dairy farms and food production facilities where large amounts of biomass (animal waste), or garbage is generated. The only other zoo using a biodigester at the moment is the zoo in Munich, Germany.

The Detroit Zoo’s Biodigester is a very small project, according to Cobb — just a little over 1,200 square feet. While small in size, the biodigester will leave a negative carbon footprint, and has the potential to have a significant impact on how others zoos generate power for their zoo facilities in the future. The estimated usable electrical energy which will be produced from the 480 tons of animal waste will be approximately 470,000-kWh each year, or, 7 to 10 percent of the electrical energy required on the Detroit Zoo Campus, according to Cobb. The by-product from this anaerobic process is considered “Class “A” fertilizer (solid) “Zoo Poo.” This by-product can be used on the Detroit Zoo Campus, sold to the community if needed, or can be used by regional golf course facilities, according to Cobb.

The biodigester is not the first sustainable effort made by the Zoo — the Detroit Zoological Society has developed a unique, green plan called their “Greenprint,” a guide for sustainable operations and facilities at the zoo, and was named one of Michigan’s and the nation’s 2016 Best and Brightest Sustainable Companies, according to the zoo’s media page.

Some examples of the zoo’s efforts are the use of solar-powered utility vehicles used for transportation around campus, and upgrading their lighting zoo-wide to LED. They have installed low-flow toilets and sensor faucets in the restrooms, zoo-wide water-bottle refill stations, and have replaced traditional hot water heaters with tankless hot water heaters. They have eliminated the sale of bottled-water altogether, saving 62,000 single-use water bottles annually according to their Greenprint, and constructed a boardwalk with 50 percent plastic bags, 45 percent recycled hardwood, and five percent polymers. This is just a handful of examples of the sustainable efforts of the Detroit Zoo — the full list of green practices of the Detroit Zoological Society can be read in their Greenprint.