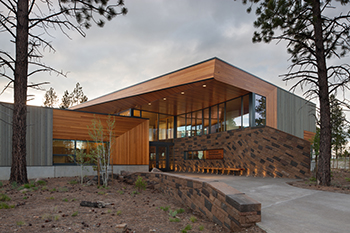 BEND, Ore. — A new Unitarian church in Bend, Ore., was recognized with a 2015 Honor Award in the international Religious Art and Architecture Design Awards program as well as a Gold certification from Earth Advantage, a Portland, Ore.-based non-profit focused on sustainable building practices.

The Unitarian Universalist Fellowship of Central Oregon completed its new 17,000-square-foot building in 2014. Portland-based Heery International Inc. commissioned the project, while Bend-based Kirby Nagelhout Construction Co. served as the builder and Portland-based Hacker Architects served as the designer. The facility features a 260-seat sanctuary with a minister and choral platform, classrooms, meeting rooms, administrative offices and support facilities such as a commercial kitchen.

The design of the building is derived from the idea of a fractured rock, shifting and parting to admit light and air. Functionally, the building is organized around a main circulation spine and central gathering space, with most rooms or suites opening up directly to these public areas. Sustainability has been a key driver in the design, with passive solar elements such as walls that collect heat from the sun and release it slowly into the building. The roof is also being built to hold solar panels in the future, according to The Bulletin, a local news outlet, and natural light and native vegetation are used throughout the space.

“Sustainability and the church design’s theme of rock, light and air go hand-in-hand,” said Richard Young, a Heery executive associate who oversaw the work, in a statement. “We were proud to work with the architects, the contractor’s team and the client to make sure the theme was pulled through the building’s mechanical operations.”

While the design promotes the congregation’s emphasis on being good stewards of the environment, it also features unisex bathrooms reserved for families and transgender individuals. A digital touch screen is available in the building’s entryway to provide people with information about the fellowship, its principles and upcoming events, reported The Bulletin.

The building was created to be a national model of sustainability and community access. Not only is it the first time the approximately 180-member congregation has had its own home since the late 1970s, but the church also plans to make the space available for community events. Founded in 1958, the Unitarian Universalist Fellowship of Central Oregon had a home in the 1960s when it bought a small building, but it was sold in the late 1970s when membership dwindled, according to the church website. The church has continued to grow again since 2000 and has met in a number of locations.