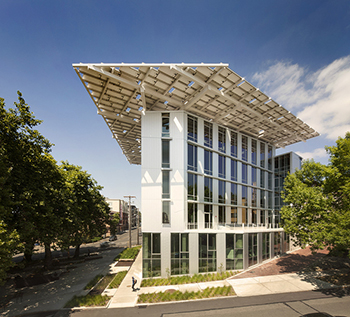 The Bullitt Center is the headquarters for the Bullitt Foundation, an organization that promotes environmental protection and sustainable communities throughout the Pacific Northwest region. The six-story commercial office building also provides a net-positive energy environment.

The Living Building Certification, sponsored by the International Living Future Institute of Seattle, is based around the Living Building Challenge, which provides a framework for design, construction and the relationship between people and their environments. The challenge is comprised of seven performance categories: place, water, energy, health and happiness, materials, equity and beauty. The certification is based on actual, rather than modeled or anticipated, performance.

To earn the certification, the center showed that it produces more electricity from rooftop solar panels than occupants use in a year. In 2014, the Bullitt Center produced 60 percent more energy from solar panels on its roof than it used.

In addition, toxic chemicals were screened from all building materials and all wood was Forest Stewardship Council certified. Its occupants’ human waste is composted and rainwater is captured for all uses, including drinking, through a filtration system.

Opened on April 17, 2013, the Bullitt Center is a 52,000-square-foot Class A commercial building. The cost to construct it was $32.5 million. The center was developed to show what’s possible in terms of sustainability and to demonstrate a path forward for other real estate development projects. Hundreds of architects, developers, engineers, public officials and students from across the world have visited the building to learn from the building and incorporate its methods and techniques into their own work.
“We made a huge, bold bet that human creativity could overcome dozens of unprecedented challenges,” Denis Hayes, CEO of the Bullitt Foundation and the Bullitt Center, said in a statement. “If Living Buildings can be built and operated in Seattle, the cloudiest major city in the contiguous 48 states, they can and should be built everywhere.”
“Quite simply, this is one of the most important buildings in the world,” Jason F. McLennan, CEO of the International Living Future Institute, added in a statement. “The Bullitt Center proves that dramatic improvements are possible when a talented group shoots for the stars.”
Other team members for the project included architecture services from The Miller Hull Partnership, based in Seattle. Schuchart, also based in Seattle, served as the general contractor and Portland, Ore.-based PAE Consulting Engineers served as the engineering firm.
“The Bullitt Center was the type of design challenge architects dream about,” Brian Court, partner at The Miller Hull Partnership, said in a statement. “The project is a new prototype, a building with essentially no environmental footprint, and the performance-based design process required to create it has changed the way we think about design moving forward.”
“If delivering the world’s first living office building weren’t challenging enough, then a tight urban site only added to the many complexities,” Casey Schuchart, building division manager at Schuchart, said in a statement. “It wasn’t only Schuchart’s first living building, but our subcontractors’ too. We had a team that truly rose to the occasion by developing products and techniques that didn’t even exist at groundbreaking.”