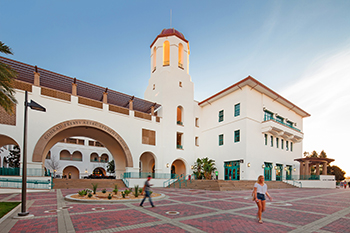 SAN DIEGO — What began as a student initiative to promote sustainability has led to LEED Platinum certification for the Conrad Prebys Aztec Student Union at San Diego State University (SDSU). The $104 million building is currently the only student union building in the California State University system to achieve the highest level of LEED.

The achievement of LEED Platinum for the replacement student union building was initially motivated by SDSU’s own Associated Students organization, which includes the Green Love Advisory Board. The student initiative saw the goal to fruition with the three-story, 200,000-square-foot building.

“The decision to go for LEED Platinum started as a grassroots effort by our students, and became an official goal of our Associated Students auxiliary and was a major commitment in the student ballot to approve the fees to build the project,” said Robert Schultz, associate vice president of real estate, planning and development for SDSU. 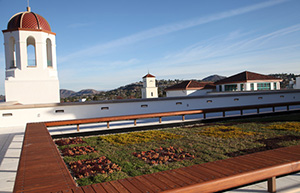 The unique design of the building, which gained major inspiration from California missions, serves as a new landmark for campus architecture and also lends itself to the building’s sustainable goals. The courtyard design and narrow building footprint of the multiple wings made natural ventilation a success, Schultz said.

“The design of the Conrad Prebys Aztec Student Union has proven that the historic Mission Revival architecture of the campus is ideally suited to building high-performance, state-of-the-art facilities for future generations of SDSU students,” he said.

Sustainable features of the building include a 356kW solar array on top of the building’s parking structure, a radiant floor system, green roof, underground storage tank to collects rainwater, eliminating discharge into stormwater system, a stormwater control system that removes pollutants from water run-off, daylighting and operable windows. The project team placed focus on every LEED category in order to achieve their high green goals.

“The secret to achieving LEED Platinum is making sure you ignore no components of sustainable design,” Schultz said. “Having said that, we are proud that we achieved every point possible for energy.”