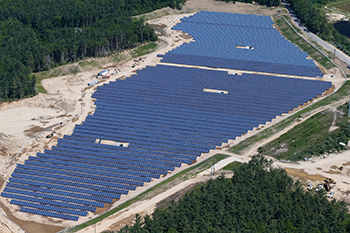 For years, schools have had to do their own belt-tightening while trying to minimize the impact of cuts on students and educators. Lowering operating expenses by reducing energy costs has proven extremely impactful, and there are numerous avenues through which to achieve this. Examples include solar thermal energy, LED lighting retrofits, web-based lighting and thermostat controls, energy-efficient building and solar photovoltaic (PV) systems.

Plymouth Public Schools (PPS), a PK-12 school district that operates 12 schools in Plymouth, Mass., has impressively taken all of the aforementioned measures to go green. Over the course of a few years, PPS’s energy-efficiency upgrades, LEED Gold building certification and energy monitoring has cut the district’s annual energy costs in half.

And now, the district’s new 5.7-megawatt (MW), off-site solar PV installation — the largest for any school or district in Massachusetts — will generate approximately 70 percent of PPS’s annual energy consumption. In addition to this system, located in Plympton, Mass., PPS is currently installing solar panels atop the new Plymouth North High School and is looking at additional sites in the region from which to source additional solar energy at below-the-grid rates.

For a number of reasons, solar PV is a particularly effective way to reduce energy costs. Schools demand the most energy use during the middle of the day when energy prices are at their highest, but because solar energy production is also high during this time of day, solar offsets the highest energy costs that school facilities typically incur. Schools generally also have large, unused rooftop space, which is ideal for housing a solar project. As the price of solar PV panels continues to drop, and as the cost of utility-provided energy increases, the economic case for solar PV systems will be stronger.

At first glance, the idea of installing a solar energy system — a large-scale one at that — might seem costly and out of reach. However, there are financing mechanisms available that can make going solar a no-brainer. A little bit of research and a conversation with an experienced installer is your quickest and simplest path to determining whether solar makes sense for your school and which financing schemes are in your favor.

If solar energy does make sense for a school facility, there are a variety of financing options to consider.

One funding option — and the one PPS exercised — is a power purchase agreement (PPA), a mechanism by which a third-party company — in PPS’s case, Borrego Solar — pays for the installation of the solar system and then sells the power back to the customer at a predetermined cost. Not only does the third-party take on all the tax incentives and pay the savings forward to the school in the form of a lower rate, it also allows schools to go solar with zero upfront costs.
With a PPA, schools can enjoy the benefits of renewable energy without the burden of large upfront capital costs. With solar, PPS is saving more than $400,000 per year in energy and is projected to save more than $8.5 million over the 20-year term of its PPA contract with Borrego Solar.

Depending on where you live, another option that may be available is a General Obligation (G.O.) bond. If bond rates are low and energy costs high, as is the case now in numerous U.S. cities and counties, the economics of going solar with a G.O. bond might make sense. G.O. bonds provide the money necessary for large capital projects such as new buildings, remodeled facilities and renewable energy projects. Although G.O. bonds are not permissible to spend on everyday operational costs, the monthly energy savings in turn can offset operational costs, such as staff salaries or school supplies, if the investment is spent on a capital improvement that will benefit the school, such as a solar energy system.

Other options to consider are a certificate of participation or tax exempt municipal lease that can be used to raise money in a similar fashion. Partnering with a solar company with proven development and financing track records working with multiple school districts is important, as it will have a strong understanding of how solar PV systems benefit a district’s operations and what rebates and incentives you can take advantage of.

Solar PV provides multiple benefits, including the money saved by reducing the amount of energy to be purchased. Other benefits flow from the savings. For example, the money we save is used to fund campus operations and support additional instruction.

Aside from the economic benefits, solar also provides school districts with a unique learning tool that can be incorporated into K-12 lesson plans across multiple disciplines. In the case of PPS, by going solar, the district is able to incorporate various solar lessons into its vocational technical program through on-site, hands-on training and education. The solar installation is being used as an ongoing education tool for these vocational courses, and solar-related curricula includes field trips to the Plympton installation, K-12 lessons plans and the use of energy production data streaming in real time to monitoring kiosks on campuses and web portals that can be accessed by students and faculty 24/7.