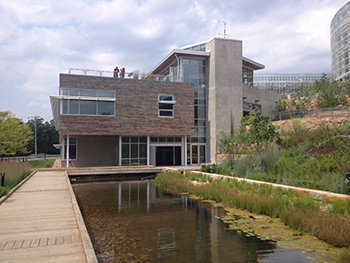 PITTSBURGH, Penn. — The Phipps Center for Sustainable Landscapes (CSL) was recently awarded LEED Platinum certification, receiving 63 out of 69 possible points through LEED’s rating system.
The CSL was a project undertaken by the Phipps Conservatory and Botanical Gardens, which has been the driving force behind multiple LEED certified buildings for more than 17 years. The building is 34,350 square feet and includes natural plant ecosystems, classrooms and public tours about green building and sustainable landscaping.
The CSL is an educational and research facility that was designed in such a way that it gives more back to the environment than it consumes. The goals of the project were to meet or exceed LEED Platinum ranking, attain the region’s first Living Building Challenge (LBC) certification and gain four-star Sustainable Sites Initiative (SITES) certification. While the certification from the LBC is still pending, the CSL could be the first building in the world to meet all three building standards.
The project team tackled these goals by employing a wide variety of highly efficient and sustainable design techniques such as using geothermal heating and cooling, an efficient HVAC system and using design techniques that take advantage of natural daylight and ventilation. The building generates more renewable energy than it uses through the use of a solar PV array and vertical wind turbine.
Recycling storm and wastewater onsite helps the CSL conserve water as well. Joseph Nagy, LEED-AP, CSL, project consultant with evolveEA, commented on the team’s water recycling efforts.
“Dealing with two existing large, abandoned underground fuel storage tanks was both a challenge and an opportunity,” he said. “The tanks were remediated and used to store rainwater, which is then distilled by a solar water purification system for watering the adjacent conservatory’s orchids. This is a cost-effective transformation of an environmental liability into part of an elegant sustainable system that helps the project recycle more water than it uses.”
Other notable solar design elements include light shelves, louvers, overhangs and screens, rooftop energy recover unit and high-performance wall, roof and window insulation and a lagoon water treatment system. The building also has advanced digital controls and a comprehensive building management system. These various features help the CSL use 50 percent less energy annually than a typical building.
Marc Mondor, AIA, LEED, principal of evolveEA, commented on the project team’s dedication throughout the design and construction process.
“The common element that helped the project team persistently address issues was the team’s strong commitment to ambitious project goals that were set early,” Mondor said. “Once committed to the goals, no one wanted to give up.”
Although the project team faced several issues during the process, such as locating building materials that complied with LBC standards, the project was ultimately a great success. Nagy stated that the recyclable water systems put into place were his favorite part of the project for both aesthetic and logistical reasons. “They integrate the building with the surrounding landscape in engaging, beautiful, complex and meditative ways. Single large systems cannot contribute so richly to a project’s sustainability,” he said.
Mondor emphasized the success of the natural daylighting initiative as one of the highlights of the project. “The daylighting of the space allows people to comfortably walk and interact with only ambient light necessary throughout the whole day,” he said.
Construction on the project began in October 2010 and was completed in May 2012. The project cost a total of $23 million, which included the cost of construction and improvements to the nearby Phipps Campus. The project team included a variety of Pittsburgh- and Philadelphia-based firms such as Design Alliance Architects, CJL Engineering, Andropogon, Atlantic Engineering Services and Civil & Environmental Consultants Inc. The Living Building Challenge and LEED certification were managed by evolveEA, while 7group LLC provided the energy modeling and energy use consultations. Massaro Corporation helped with the preconstruction cost estimation and Turner Construction was the project’s general contractor.