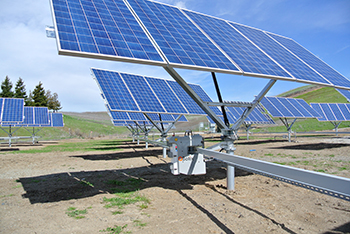 DUBLIN, Calif. — A robot is tending the solar field adjacent to the Santa Rita Jail in Dublin, Calif. It moves along a rail underneath the solar panels to adjust them to face the sun, a process that takes about 40 minutes and then starts over again.

Solbot, created by Menlo Park, Calif.-based Qbotix, is a new technology launched in February 2013 that uses automated construction, operation and maintenance to cut the cost of solar power. It is the first company to use mobile and intelligent robots for the operation of solar power plants, according to the company.

Each robot is capable of controlling 1,200 solar panels, adjusting them to follow the sun in the same way a sunflower would. The Solbot’s sensors can identify the positioning of the sun within 1 degree because the sun moves at a fairly slow rate of 10 degrees every 40 minutes, according to the company. As a result, the panels maximize on the energy gained, harnessing 30 to 40 percent more energy than panels that only face one position, said Wasq Bokhari, founder and CEO of QBotix.

The robotic tracking system is capable of high wind loads and compatible with all PV panels and foundation types. It has integrated wire management, the ability to handle different layouts and flexible ground coverage ratio. Plus, it is dust and water resistant, according to the company.

The cost of solar panels has dropped in recent years because Chinese manufacturers are building them more cheaply, so more and more energy companies are looking for innovative ways to stay in the solar market.

“The future is multifold,” Bokhari said. “No. 1: This product allows for the creation of low-cost, clean energy to power the correctional facilities. No. 2: It allows for full utilization of the adjacent site of these facilities. And No. 3: Down the road the same robots could serve other purposes such as monitoring, which would involve having cameras on them so that may add another valuable angle as well.”

QBotix will announce more projects that are coming online later this year. The corrections market is a market segment that the company is looking at, Bokhari said. “We can assist in the design of these solar installations at each of the correctional facilities,” he said. “We’re very interested in this segment and will work with interested facility managers to see how to install it so it’s a seamless experience for them.”

In July, QBotix announced that it has raised an additional $5 million from existing investors NEA, Firelake Capital and DFJ JAIC, bringing the total invested in the company to $12.5 million. The company also received a $1 million research grant from the Department of Energy’s SunShot initiative.