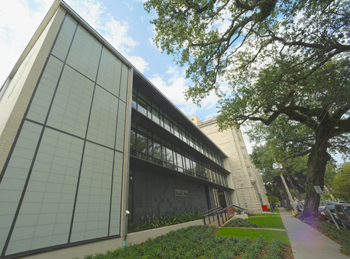 “Just working with the campus, I became familiar with the importance they put on the LEED certification process. This building taught me a lot about where LEED is going and how much of an influence it’s going to have on campuses especially,” said Lauren Ferrand, LEED administrator for Metairie, La.-based Ferrand ACS. “Students are really putting that on their list of items to check off as far as when they’re looking at schools and where they’re going to attend. Green buildings are definitely a strong draw. I would only consider green campuses if I was looking to go back to college.”

Originally built in 1959, the Broadway Building was renovated in order to adapt to the changes within the College of Law. The 23,083-square-foot space houses the Stuart H. Smith Law Clinic and Center for Social Justice, the Career Development, the Law Practice Center and Office of Law Skills and Experiential Learning. The building consists of two reception areas, 24 offices, eight restrooms, a mediation room, 10 interview rooms, student and staff lounges, five conference rooms, one classroom and one library.

Construction began in August 2010 and, from the beginning, the renovation project was decided to be an example of sustainability for the city and university. It included brand-new mechanical, electrical and plumbing, designed by Metairie, La.-based GVA Engineering. Thompson Building Energy Solutions, located in Baton Rouge, La., provided energy modeling and commissioning, and Metairie-based Automated Control Systems provided mechanical control systems and LEED administrative services.

The building features the latest energy-efficient components, such as low-emitting glazed windows, energy efficient lighting systems with sensors that turn on for occupants and efficient HVAC systems, and all plumbing fixtures are low-flow fixtures. The result: 37.6 percent water savings and 14.42 percent energy savings. Plus, 99 percent of the materials were building reuse; 12.24 percent, recycled content; 10.79 percent, regional materials; and 52.17 percent was certified wood.

Indoor air quality (IAQ) was a huge priority throughout the process. The construction team used low-emitting, non-toxic materials; installed thermal comfort controls and CO2 monitoring devices; and created access to daylight and views, with 90 percent of building occupants having access to views.

“We had IAQ testing done post construction and done pre occupancy and that was something that was a big priority to us. We really wanted the building to be a healthy environment,” Ferrand said. “Throughout construction we were being very vigilant about the VOC contents and everything. It’s always in the specs, but you have to follow up and make sure. Then, we did the IAQ testing and we passed with flying colors.”

Loyola is currently renovating Monroe Hall, which is designed to achieve at least LEED Silver certification. While the university recently decided not to apply for the certification for financial reasons, the design will still incorporate all of the design’s sustainability elements.