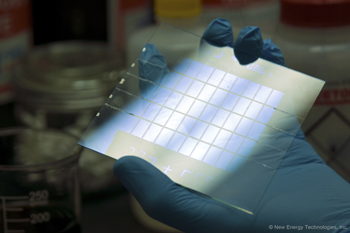 COLUMBIA, Md. — In early March, New Energy Technologies entered into Phase II of its Cooperative Research and Development Agreement (CRADA) with the U.S. Department of Energy’s National Renewable Energy Laboratory (NREL), which involves advancing the development of the company’s SolarWindow technology to generate electricity on glass.

The project is meant to advance New Energy’s electricity-generating device by enhancing performance, processing and lifetime. Researchers will also work to optimize the deposition of various coatings on flexible surfaces, allowing for electricity to be generated on surfaces such as see-through and tinted plastics.

“Company and NREL scientists jointly developed the CRADA to maintain focus on SolarWindow power production, large-area and high-speed coating equipment and methods, improving reliability and performance, and commercialization,” said John Conklin, president and CEO of New Energy Technologies, in a statement. “As we work towards commercialization, the market potential of deploying a readily available and affordable see-through glass window capable of generating electricity continues to aggressively drive our product development efforts.”

Under the terms of the CRADA, Dr. Scott Hammond, the company’s principal scientist, along with NREL research scientists, will work on future development plans, including:

In early 2012, the company and NREL made strides in developing the SolarWindow technology by finding the ability to transport electricity on glass windows, while keeping it transparent. This is made possible with the system’s ultra-fine grid-like pattern that is deposited onto the SolarWindow, which is almost invisible. Each of these cells are arranged in a network and interconnected by way of the invisible grid-like wiring system. Until now, such systems used in early SolarWindow prototypes were relatively thick and bulky, and applied to glass in ways that obstructed light, prevented the absorbance of light energy necessary to produce electricity and significantly reduced transparency. However, the new system allows for more efficient collection and transport of electrons, both important for improving circuit current and overall efficiency.

The end goal is to create a commercial opportunity to install see-through, electricity-generating glass windows in commercial buildings, tall towers and skyscrapers. The project is driven by the demand for green building materials, due to rising energy costs, increasing electricity consumption, government awareness and heightened consumer awareness.

SolarWindow technology is currently the subject of 12 patent filings and is the first-of-its-kind see-through technology that can generate electricity on glass windows.