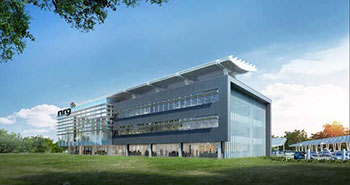 PRINCETON, N.J. — NRG Energy has broken ground on its new headquarters in Princeton, which is being described as an ultra-green, grid-resilient complex.

NRG, an advocate and provider of renewable energy, owns power-generating facilities in 47 states and has almost 3 million residential, commercial and industrial customers. Its new headquarters was developed in collaboration with and is enabled by a long-term lease with Boston Properties, which will own the building, expected to open in 2016.

With its new home, NRG hopes to design, develop and inhabit a new facility that incorporates the same resource technologies that characterize the company’s vision. The three-floor, 130,000-square-foot building will integrate a number of renewable energy technologies and efficiency measures. It will include two on-site solar fields capable of generating 765 kilowatts (kW); high-efficiency LED lighting combined with daylight harvesting, which will cut energy use by about one-third; 12,000 gallons of rainwater harvesting capacity to reduce city water use by 80 percent; and more than 30 electric vehicle charging stations. The building will be mostly independent of a grid system through dual-fuel generators and combined heat and power systems.

“Having already reduced our CO2 emissions by 40 percent since 2005, we see a clear path to further dramatic long-term reduction as we vigorously pursue our multi-faceted, long term sustainable growth strategy,” said David Crane, NRG’s CEO, at the groundbreaking ceremony on Nov. 20. “As the U.S. transitions to a renewables-driven, increasingly distributed, grid resilient energy system, we expect to be a leader both in clean energy and in converting the CO2 emissions of our conventional generation from a liability to a profitable by-product.”

These features will help reduce electricity, water and fuel use relative to a similar-sized corporate office. The 765 kW solar array is expected to produce roughly 980 megawatts of clean electricity per year, displacing approximately 588 tons of carbon dioxide annually, equivalent to the energy related emissions of 50 houses.

NRG has set out to be a leader in the development, ownership and operations of renewable generation, carbon capture and sequestration (CCS), energy storage and low-carbon distributed energy resources. The company believes that new natural gas generation will help play a role in supporting renewable integration.

“As the largest competitive generator in the country, we have the responsibility to continue reducing our carbon footprint in the medium and long term through innovation and ingenuity,” said Mauricio Gutierrez, NRG’s COO, in a statement. “Our portfolio allows us to pursue everything from fuel conversions and carbon capture and sequestration to renewables and distributed technologies. We have already started to demonstrate our lower carbon strategies with our asset revitalization program and with NRG Carbon 360, our carbon capture business that includes our Petra Nova project at WA Parish, southwest of Houston. With the construction of our new headquarters, we will showcase the distributed energy solutions available to businesses committed to sustainability across America.”