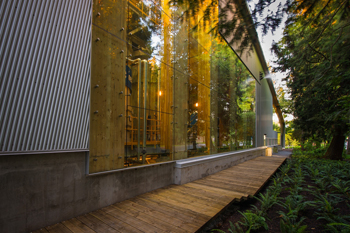 POINT GREY, British Columbia — The University of British Columbia (UBC) recently became Canada’s first major higher education provider to produce both clean heat and electricity from renewable bioenergy. The university officially opened its $34 million Bioenergy Research and Demonstration Facility in mid-September. The fuel for the new structure will come from tree trimmings and wood chips, which would have otherwise been deposited at local landfills.

The facility will generate the equivalent of the amount of electricity needed to power 1,500 homes, accounting for 12 percent of the school’s heating requirements. This will cut the university’s natural gas consumption by a corresponding 12 percent, which will in turn lower greenhouse gas emissions by nine percent. Essentially, the change equates to taking 1,000 cars off the road.

The effort is part of a $150 million effort at UBC, involving four separate projects, which will combine to reduce the institution’s greenhouse gas emissions by 33 percent by 2015, returning the school’s emissions to below 2007 levels. UBC is known among major universities for having extremely aggressive goals for emission reductions, including a 67 percent reduction in emissions by 2020 and a target of zero emissions by 2050. The school was the first Canadian university to meet the Kyoto Protocol requirements, received the nation’s first gold STARS rating, and is considered one of the greenest campuses in the world.

UBC researchers and students will use the facility to experiment with bioenergy and other clean energy technologies.

“This exciting facility targets a major challenge facing society – the need for new, clean energy solutions that work at a community scale,” said UBC President Stephen Toope. “This is a flagship example of UBC as a living laboratory, where researchers, staff, students and partners collaborate on innovations targeting the pressing challenges of our day.” 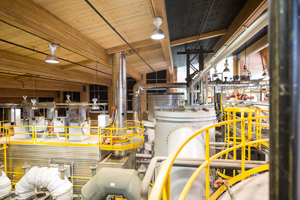 Synthetic gas, known as syngas within the industry, is produced through gasification, a process where waste products are heated until they change from a solid to a gas. The gas must then go through a cleaning process to lower the amount of byproducts produced when it’s eventually consumed to create electricity. An Austrian wing of GE designs Jenbacher engines for burning various types of gas, with bioenergy being a particular area of expertise.

The four-story facility also represents the first commercial-level application of cross-laminated-timber in North America. The process involves gluing boards or panels together in layers and is known for being able to span large distances, while maintaining structural integrity. The wood product is particularly notable for being used in place of concrete or steel in many situations. Basically, it is a much stronger structural material than most people would normally associate with wood. The product used in this project was manufactured in British Columbia, and used local timber as well.

The university received $13.7 million in funding from the Canadian federal government and $7 million from the British Columbia local government. The project also received contributions from FPInnovations, a sustainable timber products research and development firm, and the Canadian Wood Council, a national association representing wood product manufacturers.

Mike Scott, president and CEO of Nexterra, felt the project would showcase bioenergy to the rest of the world. “We are seeing significant interest in this next-generation solution from around the globe. We look forward to further proving the system out at UBC and then replicating this system worldwide.”