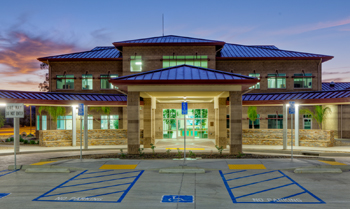 “The primary focus was giving them a state-of-the art facility built of the highest quality that we could afford for them. Giving them the best opportunity to heal and get their lives together so they could be productive members of society,” said Sean Hulen, vice president and project executive of Balfour Beatty Construction.

According to Hulen, the facility was designed due to the Marine Corps having to deal with all the injured men and women coming back from the war, debilitated in some way. The Marine Corps work in a unit formation, with soldiers constantly around fellow officers, all working as a collective unit. The point of the Wounded Warrior Headquarters and Hope and Care Center was to bring together injured Marines, put them in a rehabilitation unit and provide them with whatever tools necessary to better their emotional, physical and/or mental health.

The sustainable design solutions are expected to provide more than $52,000 in annual energy savings combined for both buildings and reduce water usage by more than 84,000 gallons per year, according to a statement from Balfour Beatty.

One aspect of the facility that makes it LEED Platinum is the recycling of water system. The RFP asked for a dual-pipe system for the future if and when reclaimed water comes to the area. All of the toilets and urinals are piped to have reclaimed water for flushing, with sinks and showers going to gray water systems that filters and reuses the water for the landscaping at the facility.

All of the storm water for the Hope and Care building is collected from a rainwater harvesting tank that fills during the rainy season and provides enough water for all the shrubs and plants outside the building for the whole year.

“The most important thing that we were concerned with about the facility is that almost all of the human performance measures that are in LEED like natural ventilation and natural light views, controllability of systems were all applied to the building so that the people in them could use those things as healing tools as much as possible,” said Hulen.

The multi-purpose and headquarters administration area has 9,354 square feet of space for administrations and operations as well as conference rooms and a visitor waiting area.

The Wounded Warrior Barracks was constructed in 2010 and was built as an emotional and physical recovery facility for wounded warriors. The 100-suite center received almost perfect scores for interiors that used recycled and environmentally safe materials and energy-saving equipment for bedrooms, hallways, showers and recreational areas.