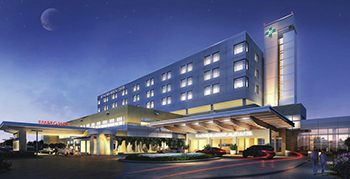 In 2015, the green building industry expanded drastically as companies continued to find cost savings and energy efficiency by building sustainable facilities. Architects and owners used innovative design features to achieve LEED certification and create a better environment for employees. Green Building News anticipates even more sustainable construction growth, and has compiled a diverse list of projects to watch in 2016.

1. Tradition Medical Center: The LEED Gold Tradition Medical Center in Stuart, Fla., part of the Martin Health System, opened its doors in December 2013. Not long after, however, expansion became necessary as the hospital was exceeding its capacity. Phase II of construction began on Oct. 21, 2015, and will add an additional 170,000-square-feet and three stories to the facility. The hospital added smart design features that allowed for a high quality and efficient medical facility. The targeted date for completion on the new expansion is spring 2018.

2. UCSF Benioff Children’s Hospital: The UCSF Benioff Children’s Hospital in Oakland, Calif., broke ground in October 2015 on a new outpatient center (OPC2) that will be part of the first phase of a 10-year expansion plan to update the facility. The OPC2 will be a six-story, 89,00-square-foot facility and will be adjoined to the current outpatient center. The facility has been designed to achieve LEED for Healthcare Silver certification. It is anticipated to use 38.4 percent less energy than the average health care building and reduce the water usage by 35 percent. The building will use low-emitting materials to create better indoor air quality and improve sustainability.

3. Acadiana Center for Youth: The Acadiana Center for Youth in Bunkie, La., will focus on group treatment and accountability rather than a correctional facility environment. The project expects a May 2016 completion. The $20.1 million, 61,000-square-foot facility will use the Louisiana Model for Secure Care to encourage rehabilitation. The facility will hold a maximum of 72 youth offenders in groups of 10 to 12 to create family-like environments. The facility is not going to seek LEED, but will work to include sustainable and energy-efficient features.

4. Alameda County Courthouse: The new East County Hall of Justice in Dublin, Calif., held a topping out ceremony in September 2015 to mark 40 percent completion of the courthouse, which is set to open in early 2017. The $111 million courthouse is made up of two buildings totaling 199,000 square feet of space. The first is a five-story, 156,000-square-foot courthouse for the Alameda County Superior Court of California. The second structure will be the Judicial Office Building, which is a two story, 43,000-square-foot building. The project is designed to achieve LEED Silver by including energy- and water-saving techniques, such as recycled water for irrigation, native drought-tolerant landscaping, low-flow fixtures, LED lighting and natural light.

5. Bristol Community College: The John J. Sbrega Health and Science Building on the Bristol Community College campus in Fall River, Mass., is set to open in April 2016. The project will provide a state-of-the-art laboratory for science and health science. The facility, designed by Boston-based Sasaki, used unique and innovative design elements to help achieve net-zero energy use. The design was able to drastically reduce energy consumption by about 80 percent compared to a theoretical baseline.