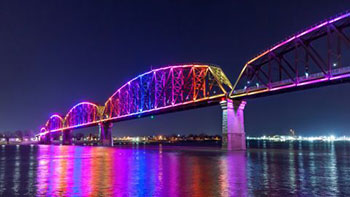 LOUISVILLE, Ky. — A new LED lighting system for The Big Four Bridge in Louisville will help power the structure in an energy-efficient way.

Louisville Mayor Greg Fischer flipped the switch on the new lighting system in a recent ceremony. The system was manufactured by Philips, based in Amsterdam, and installed by Louisville-based Advanced Electrical Systems (AES). The software-based control system was installed and commissioned by Vincent Lighting Systems, an Erlanger, Ky.-based systems integrator.

The public-private partnership between the city and Philips will help transform the bridge into a nighttime art piece with dancing LED lights. The lighting system is part of the mayor’s six-year plan to create a green environment around the city through the use of energy-efficient LED technology.

“This was a strategic opportunity to leverage LED technology to further enhance the city’s most popular attraction and continue the momentum of moving Louisville forward as an innovative and independent city,” said Mayor Fischer in a statement. “The new lighting will make the bridge safer at night, enhance waterfront events and contribute to the artistic flair and pride of this community.”

Originally built in 1895 and standing 200 feet above the Ohio River, the bridge connects Louisville with southern Indiana. In 2013, the bridge opened a pedestrian and bike path, which helped to revitalize the area, and an estimated one million visitors come to use or view the bridge annually. The bridge now showcases 1,500 LED lights, which were installed over a period of about six months. A crew of 12 mounted the lights, running fiber glass conduits the full length of the bridge installing fiber cabling. Each light should last at least 10 years and require almost no maintenance.

“This is a landmark,” said James Strange, AES’s vice president, in a statement. “To know we helped change the skyline of the city for the better was an honor.”

The system includes intense spotlights and wide-beam floodlights attached to the steel structure — spaced atop and under the arches and along the deck — as well as flat LEDs placed inside hollow beams.

Pedestrians in the surrounding parks now have a lightshow to watch from dusk to 12:30 a.m. The Louisville mayor hopes it will benefit the local economy. Louisville joins other cities such as San Francisco, Philadelphia, Boston, Corpus Christi, Texas and Little Rock, Ark. in revitalizing their bridges.

“Illuminating iconic structures creates a meaningful impact in a community, a source of pride for residents that brings people together, attracts visitors and is a reflection of the city,” said Amy Huntington, president of Philips Lighting Americas, in a statement. “The Big Four Pedestrian Bridge is a shining example of the positive impact that public-private partnerships can have in our communities. We are committed to working with city officials and local organizations to help make neighborhoods more livable.”