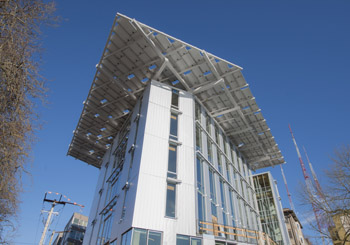 SEATTLE — On April 22 (a.k.a. Earth Day), the Bullitt Center will commemorate its grand opening in Seattle. The six-story, 50,000-square-foot building is the nation’s first urban mid-rise commercial project to meet the Living Building Challenge, the highest standard for sustainable buildings. To be certified under the challenge, projects are required to accomplish net zero energy, waste and water, with more than 12 months of continuous occupancy.

The owner of the building is the nonprofit Bullitt Foundation, which works to protect the natural environment by promoting responsible activities and sustainable communities in the Pacific Northwest. Their new location — taking up 3,000 square feet of the building — will promote just that and serve as a prime example of green building. In fact, the Center for Energy & Urban Ecology will be located on the lower floor of the building and will feature an open resource library, classrooms, exhibition space and a research laboratory dedicated to the training of future green building leaders.

Most of the building is already tenanted with organizations that have similar sustainability-driven goals. PAE Consulting Engineers had wanted to open an office in Seattle for about five years and looked for a location that would represent their green efforts.

“Especially because we were involved in [the Bullitt Center project], this is the right place. We’re a very environmentally sensitive company and are working on three or four living buildings right now, so living in one of them is really important to us,” said Paul Schwer, president of PAE. “Part of what we found in doing the studies for the living building is that 50 percent of the energy use comes from the tenants because everything else is efficient. So, what we really wanted to do is be a tenant in one of these buildings and see if we can live within the budget.”

The Bullitt Center meets the Living Building Challenge in several ways, including collecting rain and recycling water through its own capture and filtration system, implementing a solar array on the roof, using sustainably farmed wood and incorporating on-site waste management, such as the six-story composting toilet system. 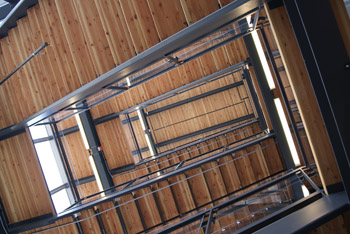 It was able to achieve such high efficiency ratings because of the owner’s ambitious goals. “The most important piece was having an owner set a really high goal and never waiver,” Schwer said. “When Denis Hayes said it was going to be a living building, no one questioned it; he never waivered, and the team just knew we had to do it. Setting an inspiring and challenging goal is really important, and design teams love owners that do that because it really pushes them.”

The key green elements that Schwer believed made this project possible started with analyzing the climate. Seattle has a mild climate, but is also one of the cloudiest climates in the country.

Schwer said PAE “really concentrated on reducing the load so we started with the skin of the building and it’s very efficient and also very low leakage. The simple thing that most projects don’t do yet is move the insulation outside the stud cavity and what that does is gets rid of all thermal breaks in your wall.”

Because the green building goal was so ambitious, there were inevitable challenges that arose for the design team. One of the biggest challenges was getting net zero water because there was several code challenges to meet. For instance, the team wanted to use rainwater and make it potable, but it required an 18-month process of working with organizations in order for them to feel comfortable enough with the design and the filtration system that allowed for this.

Another challenge involved materials since the Living Building Challenge has a list of materials that can’t be used. “The list of materials isn’t really that long, but the reality is that there are 362 different trade names for all those chemicals listed,” Schwer said.

About halfway through the process Schwer said he realized that PAE wouldn’t be able to meet the budget for the building’s efficiency requirements if it was a tenant in the building. This really transformed the way the company looked at its internal load, and as a result, PAE reduced its computer load by 80 percent. Schwer described this as an eye-opening experience that all companies can follow.

Another piece of advice for green builders: “Design skins that are so good that you no longer need perimeter heating systems. Find a way to tunnel through the cost barrier and build skins that are that good, whether they’re passive house good or below passive house,” Schwer said. “That gives flexibility on the mechanical side; it gives more money available for a great skin and creates a more thermally comfortable environment. This can really start changing how much energy these buildings use.”