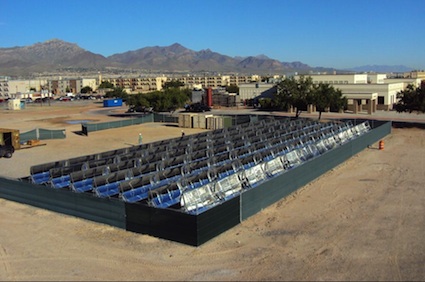 Executed through the U.S. Army Engineering and Support Center in Huntsville, Ala., the project is expected to save $39 million in energy costs over the next 24 years.

Johnson Controls will install and maintain 5,500 solar panels, while the Army will purchase renewable energy produced by the panels. The Fort Bliss project also includes new utility monitoring and control systems to manage energy at 120 buildings, a program designed to reduce electricity use during peak demand periods. Both measures are expected to reduce greenhouse gas emissions equivalent to removing 1,280 vehicles from the road annually, or planting 1,400 acres of pine forest each year.

“We hope to be energy efficient by 2015,” said Jean Offutt, the Fort Bliss Garrison public affairs officer. “Anything being done to support that initiative is good news for us.”

The contract marks the fourth partnership between Johnson Controls and Fort Bliss since 2007, for a total of $35 million in energy conservation projects.

Fort Bliss is the first respondent to President Barack Obama’s directive calling on federal agencies to make $2 billion worth of energy efficiency upgrades over the next two years using Energy Savings Performance Contracting (ESPC), a statement from Johnson Control reported. The project will also be the first Army project to take advantage of a federal renewable energy tax credit totaling $1.87 million and supports the Army’s renewable energy goals, according to the statement.

Under the agreement, the costs of the improvements will be paid for over time through reduced energy utility bills, guaranteed by Johnson Controls — meaning no upfront costs to the government.

“I hope this is the first of many of these types of projects under an ESPC,” said Michael Norton, branch chief of the Energy Division for the Army’s Engineering and Support Center.

Under the Federal Performance Contracting Program, Johnson Controls has implemented more than 100 projects for the Army, Department of Energy, Air Force, Navy, General Services Administration, Department of Veterans Affairs, Justice Department and Department of the Interior.