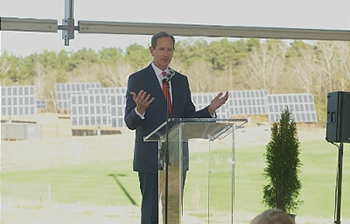 ATHENS, Ga. — The University of Georgia and Atlanta-headquartered Georgia Power have partnered on a 1-megawatt solar energy project on the university’s campus in Athens to help expand the state’s portfolio of power generation options.

The project was dedicated on Dec. 15 and is located on a 10-acre site owned by the university. As part of the two-year partnership, researchers from the university’s College of Engineering will study solar forecasting and the effects of solar panel soiling versus performance. Data analysis and performance reporting will occur through an additional partnership between Georgia Power and the Electric Power Research Institute (EPRI) of Palo Alto, Calif.

The panels, located near the State Botanical Gardens, are arranged in three configurations, with one facing south and others facing southwest. Some of the panels will track the sun as it moves overhead, while others will also change compass directions to more closely track the sun, reported OnlineAthens. On average, the panels move every couple minutes, and researchers will study the different configurations to see which provides the highest degree of energy efficiency. Ultimately, the new solar project will demonstrate optimal orientation and tracking technology suited for Georgia’s climate and energy demand with project partners studying the performance and reliability of the various fixed and tracking configurations.

"Working in coordination with the Georgia Public Service Commission, and through strong relationships with organizations such as UGA, we have positioned Georgia as a national solar leader," said Paul Bowers, chairman, president and CEO of Georgia Power, in a statement. "Now more than ever, it’s essential that we continue to invest in the research and development of new technologies to make solar, and all generation sources, as reliable, efficient and cost-effective for our customers as possible."

Georgia Power owns and will operate the facility under a 20-year lease agreement with the university. Energy produced by the facility will flow to the state’s electric grid to serve customers, and the university will receive the renewable energy credits (RECs).

"The complex problems facing our world today, such as the need to expand our sources of energy, require not only interdisciplinary efforts but also multi-institutional efforts that involve higher education, private industry and government," said UGA President Jere W. Morehead in a statement. "The Solar Tracking Demonstration Project is a perfect example of this type of broad collaboration, and the University of Georgia is pleased to be part of this exciting endeavor.”

While the solar tracking research will benefit the state, its location on the university campus will also benefit engineering students who are interested in learning about alternative energy sources. It also fits in with the school’s new experiential learning initiative, which requires undergraduate students to do something significant within their field of study outside the classroom, reported OnlineAthens. The project also ties into the university’s expanding commitment to research enterprises.

The solar tracking facility was installed by Atlanta-based Radiance Solar, which works with institutional, utility and commercial customers.

This article was originally published on School Construction News.