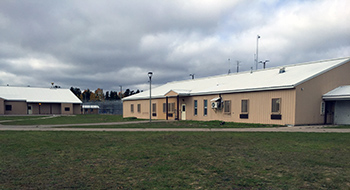 The former Hiawatha Correctional Facility had been closed since 2009 after the DOC decided to downsize the department as a whole as well as reduce the inmate population to about 7,000, according to David Flack, administrator of the physical plant division for the DOC. Renovating the closed prison was a cheaper option than renovating the old Kinross facility because it was originally built as a U.S. Air Force based and became a security challenge for the DOC.

“When you take something that was built for a totally different function and try to make a prison out of it, it doesn’t always fit very well,” Flack said.

While the former Hiawatha facility was originally built as a correctional facility, it was essentially being used as a boneyard for the DOC to take equipment from and use in other facilities after it closed. The renovation included replacing the security systems in the facility and changing them from analog to IP at the same time, Flack said.

The perimeter fence at the renovated facility has an inner fence (A fence) and an outer one (B Fence), which each feature two new state-of-the-art security systems. The facility also has an entirely new Sunstar Personnel Emergency Locating System (PELS) as well as an all-new video management system on the front end and all-new surveillance cameras on the inside. Flack said the DOC is also testing some systems such as sensor coil for sensitive areas.

New food service equipment and fire alarm systems were also added in addition to the typical cleaning and fresh paint required for a facility that’s been sitting idle for six years. All of the facility’s perimeter and interior lights were also updated to LEDs, which the DOC is doing to all its facilities because LEDS work well with the new security systems. Other than that, “the facility was in great shape,” Flack added.

The biggest challenge was simply meeting the deadline, Flack said. The DOC had about 10 months to renovate, transfer everything to the former Hiawatha facility and shut down the old Kinross facility.

Flack said that apart from the issue that the old Kinross facility was not originally designed for correctional use, the transfer to the renovated facility will also help operations run more efficiently and therefore cost the state less money to run. “Staffing won’t be as intense,” he said. “[The renovated facility] will still have the same inmate-per-staff ratio where it counts, but overall it will be less expensive and our energy bill will be greatly reduced because it’s a smaller, more compact site. It will be easier to heat and much cheaper.”

The DOC will still use all the outside auxiliary utility buildings at the old Kinross facility as they’re currently being used now, and the site will continue to serve as a regional transfer center for inmates, according to Flack.

This article was originally published on Correctional News.