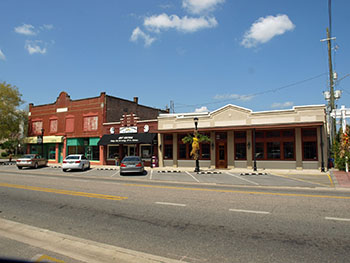 The city of Foley, Ala., with a population of roughly 14,000 residents, decided last year to pursue an energy initiative that could help restore aging buildings while offsetting costs through sustainable efforts. The city council authorized Mayor John Koniar to partner with Schneider Electric, an energy management company based in Illinois.

“ESPCs are an alternative financing mechanism that allows federal, state, county and city agencies, as well as higher education and K-12 institutions, to pay for capital improvements over time with utility and operational savings, rather than with traditional government appropriations, taxes or debt,” said Tammy Fulop, vice president of energy and sustainability for Schneider Electric. “With an ESPC, a public agency or school forms a partnership with an energy service company (ESCO) that develops and designs the infrastructure project, secures private sector financing to cover up-front costs, and then installs and maintains the system. The public agency then pays back the private investors over the life of the contract, often between 10 to 25 years, with surplus funds created by energy savings. The ESCO guarantees the energy savings, meaning it pays the difference if savings fall below expectations.”

Southern cities such as Foley have been facing increased pressure to improve energy performance, and have been finding value in energy-related public-private partnerships as a way to address aging infrastructure challenges during a period of serious financial constraints.

“The city of Foley, like most communities, has a lot of antiquated buildings and a lot of inefficiencies that were built into the technology 20 years ago,” said Koniar. “[An ESPC] provides us a method to replace all that and pay for it with savings through the utility production. It’s really a no-brainer when you’re approaching it with that method.”

Under the performance contract, Schneider has promised a minimum of $150,000 in savings per year. But Mike Thompson, Foley city administrator, believes it will be higher than that, with savings coming in closer to $180,000 a year.

“We’re able to take those savings that we’ve created through the work that Schneider performed for us, and it funds that new infrastructure and it funds the cost of the bond that we issued,” said Thompson.

“Under state law, when you do a performance contract, it has to pay for itself,” added Ralph Hellmich, Foley city council president.

Energy-efficiency projects have a strong impact on economic development, according to Fulop. She cited a recent research project by the Southeast Energy Efficiency Alliance that showed energy projects have a 387 percent return on investment and are better job creators than construction, manufacturing and renewables.

“We are helping our clients go beyond the traditional scope of energy efficiency projects to include investments in renewable energies, IT and telecomm technology, security, and brick and mortar renovations. Many of our clients are using energy projects as long-term vehicles to help support the upkeep of publically owned buildings and operational systems city-wide. In some cases, we may be on our third or fourth contract with a client we’ve been working with for 20 years,” Fulop said.