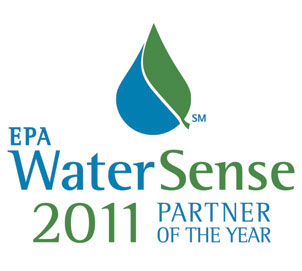 WASHINGTON — The U.S. Environmental Protection Agency added new categories to its 2011 WaterSense Partner of the Year award at its annual awards program that recognize builders and certifying organizations who made efforts to promote water efficiency and WaterSense-labeled products.

Atlanta, Ga.-based Cobb Counter Water System earned its second WaterSense Partner of the Year award for promoting WaterSense-labeled new homes, training irrigation professionals, raising consumer awareness about WaterSense from 10 to 80 percent, and coordinating with other WaterSense partners to host a “We’re for Water” educational event at the Georgia Aquarium.

Delta Faucet Co. won an award for its commitment to increasing the number of WaterSense-labeled products in the marketplace by leading a coalition of stakeholders who developed a performance test for showerheads. By the end of 2010, nearly 40 percent of the company’s showerhead shipments and more than 85 percent of its lavatory faucets were WaterSense labeled, according to the agency.

Retailer The Home Depot estimated that it helped customers save 27 billion gallons of water and $174 million on water utility bills in 2010 by offering a complete line of WaterSense-labeled products in its 2,000 retail stores, the agency reported. More than two-thirds of the retailer’s bathroom fixture stock carries the WaterSense label and 100 percent of the lavatory faucets it sells are WaterSense labeled.

The 2011 WaterSense Partners of the Year, along with Excellence Award winners — partners recognized for achievement in a specific Partner of the Year award evaluation category — were honored at a banquet co-sponsored by the Alliance for Water Efficiency on Oct. 5 during the WaterSmart Innovations Conference in Las Vegas, Nev.