Articles
April 22, 2011April 22, 2011 709 Views Eastern U.S., Educational Facility, Hord Coplan Macht
WASHINGTON — The Army released a list of installations earlier this week that will participate in an energy-conserving pilot program that aims to use only as much energy as they create by 2020.
The initiative, called Net Zero, will focus on energy, water and waste usage procedures, according to Katherine Hammack, assistant secretary of the Army for Installations, Energy and Environment.
"Operational energy is a critical focus to the whole Department of Defense, and everything that we can do to reduce that logistical field is very important to the soldiers and the cost of the battles that we’re fighting," Hammack said.
The installation sites were chosen for the pilot program through a self-nomination process, many of whom had already implemented energy-saving 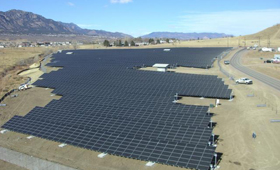 measures.
More than 100 nominations came in from around the world, and were narrowed down to six in each of the three categories.
Installations in Fort Bliss, Texas, and Fort Carson, Colo., will be practicing conservation strategies in all three categories to become integrated Net Zero sites.
Energy-saving measures already installed in clued solar panels, repurposing used water and retrofitting water fixtures such as faucets and shower heads, Hammack said.
Conserving water in Texas is a challenge because of the hot, dry climate, according to Maj. Gen. Dana Pittard, the commanding general of Fort Bliss, Texas.
"The issue of water in the desert is a huge issue for us," he said.
Pittard said Fort Bliss is working with the neighboring city of El Paso on how to better use grey water.
As a way to address the water issue, newly built base housing areas have been landscaped with naturally growing desert plants to get rid of lawns and trees that require heavy watering, he said.
Fort Bliss is working on renovating other parts of the base with similar landscaping. Officials at the base also plan to build a 20-megawatt solar facility and a net zero housing community of at least 500 homes in the future.
Hammack noted that each of the installations will be diverse in size, structure and climate.
"We don’t want to force each installation to subscribe to a certain strategy overall, but to highlight the many different ways to reach Net Zero," Hammack said. "There is no silver bullet that is a one-size-fits-all solution, and one of the things that is important in this pilot program is to identify that there are a variety of ways to reach Net Zero, dependent upon your local resource."
Hammack also said energy security is a national imperative, and not having to rely on outside resources for sustainability would be helpful for installations both in the United States and in deployed settings.