Every day we hear about the fiscal cliff and how it, or a deal to avoid it, might affect the national economy or individual pocket books. One of the main topics of discussion is the Republican Party’s proposal to increase revenue by eliminating some tax credits and incentives. Most of the talk focuses on how tax credits might affect charitable giving or the tax returns of individual citizens, but people in the wind turbine industry are beginning to make noise about the possibility of losing their Wind Production Tax Credit.

The initiative, which was developed as an effort to drive down the cost of renewable energy, launched in 2007 through google.org, the company’s charitable arm. The initiative featured an RE<C engineering team focused on researching improvements to solar power.

PIEDMONT, Calif. – At a ribbon-cutting ceremony for what planners say is the largest solar and energy-efficiency school project, school officials announced they would be handing the scissors to the students. 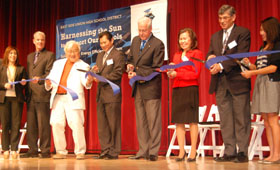 New Brunswick — Dorchester Penitentiary, a 466-inmate, medium-security facility in New Brunswick, Canada, is home to the first large-scale wind turbine erected by the Correctional Service of Canada and the largest installation on Canadian government property.