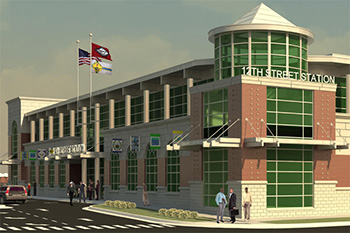 “This building serves as a very strong commitment from the city to help encourage revitalization and economic growth which is long overdue,” said Ward 2 City Director Ken Richardson in a statement.

The police station is a two story, mixed-use building. Three retail bays and one restaurant bay included in the design will be leased by the city to private businesses.

The $12.5 million facility is located in south central Little Rock and is included in the 12th Street Redevelopment Plan, under guidance from Richardson. The project is also part of efforts to improve the city’s Midtown area as a whole, and will serve as an anchor for the 12th Street redevelopment with hopes to spur private investment and new businesses.

The LEED certification for 12th Street Station was based on several sustainable building achievements. To incentivize alternate forms of transportation, there are preferred parking spaces and a preferred drop-off location for low-emitting and fuel-efficient vehicles, as well as bicycle storage to help minimize pollution associated with traditional automobile use.

In terms of energy, the building saves 13 percent more energy than a comparable building, and all energy systems and the building envelope underwent fundamental and enhanced commissioning. This process prevents the excessive use of energy and reduces greenhouse gas emissions.

Of the materials used in construction, more than 22 percent contained recycled content and more than 31 percent were both extracted and manufactured from within 500 miles of the project site. More than 81 percent of the total construction waste generated was diverted away from landfills.

Inside, 100 percent of the interior paints, coatings, adhesives, sealants and flooring systems contain minimal or no Volatile Organic Content (VOC). More than 95 percent of occupants can adjust their own lighting and more than 62 percent can adjust their thermal comfort, while all multi-occupant spaces can adjust both.

“The green building movement offers an unprecedented opportunity to respond to the most-important challenges of our time, including global climate change, dependence on non-sustainable and expensive resources of energy and threats to human health,” said Rick Fedrizzi, president, CEO and founding chair, USGBC, in a statement. “The work of innovative building projects such as the 12th Street Station is a fundamental driving force in the green building movement.”