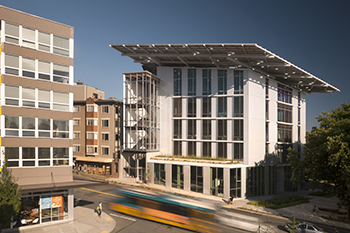 SAN FRANCISCO — The Net Positive Energy + Water Conference, held last week, brought together forward thinking green architects and builders to discuss the current status and future of net-zero energy and water concepts. The conference was hosted by the International Living Future Institute (ILFI) and facilitated discussions about methods of net-zero water and energy in the framework of the Living Building Challenge.

The ILFI, which chose the program for the conference’s opening plenary, believes the Bullitt Center is an example of what can be achieved with today’s green building technologies, according to Brad Liljequist, technical director of the Living Building Challenge.

“The design and technologies used both on the energy and water side are amazing examples, and we wanted people to hear about them,” Liljequist said. “Also, Dennis Hayes is just an amazing speaker, a really profound deep thinker.” 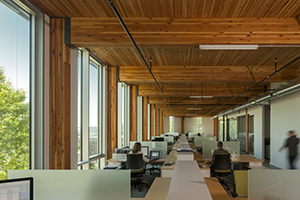 The Bullitt Center has garnered serious attention in the green building community for its innovation and highly efficient design. The six-story, 50,000-square-foot building opened Earth Day 2013 and is set to achieve the Living Building Challenge after it reaches 12 months of operation with net-zero energy, waste and water.

The center, which has a lifespan of 250 years, uses a solar array, greywater system, rainwater harvesting system, hydronic radiant tubing and composting toilets as well as several other sustainable features throughout. The building is also the first in the nation to use rainwater as potable water. The dynamic design of the Bullitt Center is also indicative of its sustainable focus, Hayes said. For example, the Bullitt Center uses only beautiful FSC-certified wood as timber framing supports.

“[The Bullitt Center] has a high degree of grace and elegance to it but it also provides form and function,” he said. 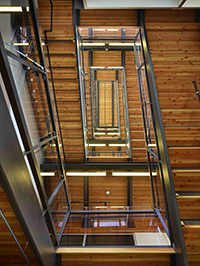 The 575-panel photovoltaic array of the building spreads out like the canopy of a tree to provide electricity for the center. The solar array is expected to provide 23,000 kWh each year. The success of the photovoltaic system in Seattle, where sunlight is not abundant, should speak to the possibility of solar power, Hayes added.

“If you can do it in Seattle, you should be able to do it almost any place,” Hayes said.

The speaker also encouraged listeners to attempt to achieve the Living Building Challenge, which requires net -ero energy, water and waste, rather than attempting for green building certifications.

“When people try and go for certification, everyone does just about as little as possible to get the certification they need,” Hayes said.

Hayes, the founder of Earth Day, believes that the Bullitt Center is an example of just how achievable the Living Building Challenge can be with the right tools and mindset.

“Once you’ve done something, once you know it exists, things start happening,” he said.