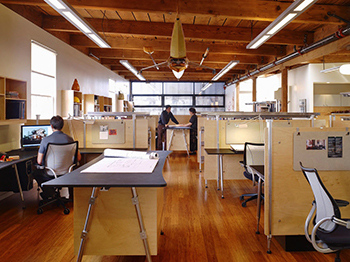 SAN FRANCISCO — The AIA COTE Plus Award, presented to architects who demonstrate excellent use of sustainable design elements, was awarded to locally based Aidlin Darling Design on Aug. 26. This is not the first big win for the architectural firm — they recently received the National Design Award as well for their success with interior design.

The AIA awarded Aidlin the COTE Plus Award for the building the firm designed at 355 11th Street in San Francisco. This is the second award for this project, which also won an AIA COTE Top Ten Green Project award back in 2010. The general contractor throughout the construction process was locally based Matarozzi Pelsinger Builders.

The three-story building, located in the South of Market (SoMa) neighborhood, totals 14,000 square feet. With both office spaces and a restaurant, the multi-functional building provides a great new social and professional space for residents in the neighborhood.

The project features numerous elements of innovative green building design as well. The green roof traps rain water for use onsite, and a rooftop garden allows the restaurant’s chefs to grow various herbs for use in the kitchen and at the bar.

The project team installed solar panels as well, which provide much of the energy needed to operate the building. To combat the heat generated from the sun, the team also designed a unique scrim façade to help minimize the heat and allow natural light to flood the interior space. Constructed from perforated zinc, the scrim helped the team reach its sustainability goals while also maintaining the historic look of the preexisting early-20th-century warehouse, which is listed on the National Register of Historic Places. Because of the historic nature of the building, the design team was not allowed to add any more windows or drastically change the building’s appearance.

The scrim’s small holes — varying from one inch to an eighth of an inch — helped admit more natural light into the building while also maintaining the façade’s largely monolithic and opaque appearance. The perforation allows natural airflow to circulate throughout the building as well. The unique scrim façade is one of the defining features that helped the restaurant portion of the building achieve LEED-CI Platinum and the office space achieve LEED-NC Gold. 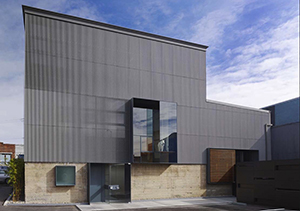 All of the materials used for the building were procured from within 15 miles of the project site, resulting in a creative use of preexisting materials. The interior of the building, for example, was designed using recycled wood from sources such as whiskey oak barrels and beams of oak salvaged from barns.

Although the project went smoothly overall, the team did encounter a few problems along the way. One of the biggest problems they encountered was the presence of tiny microclimates on the roof. Many of the plants died in the first year, but with some reorganizing and planning, they were able to take advantage of the slight differences in climate and revitalize the green roof, according to Joshua Aidlin, AIA and partner at Aidlin Darling Design.

The restricted window construction posed a design issue as well. The team had to work with the building’s preexisting window setup, which meant orienting the interior space around the exterior, rather than the other way around. The kitchen, for example, was placed next to a wall of windows, rather than a dining room. Aidlin mentioned that a traditional layout for a project like this would have the opposite orientation.