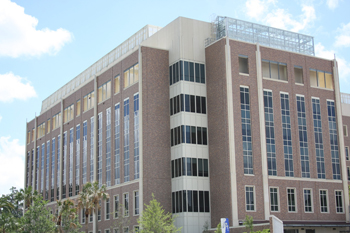 GAINESVILLE, Fla. — The University of Florida is currently in the process of going solar, with plans in place to have panels of photovoltaic cells installed by November.

The school will use 100-kilowatt arrays designed and installed by Progress Energy, out of Charlotte, N.C. The company is providing the equipment and installation for free as part of its SunSense Schools program. Progress Energy offers free solar energy systems to 10 public schools in the K-12 category and one higher education facility each year through the program.

The program strives to select a school with high-energy needs and a dedication to renewable energy education. "As a longtime partner in energy education and development, the University of Florida has demonstrated its firmly held commitment to paving the way to a cleaner, more efficient energy future," said Vincent Dolan, Florida president for Duke Energy, the parent company over Progress Energy.

The school started work on the project in mid-September. All the panels will be ground-mounted. The largest system, coming in at 78-kilowatts, will be appropriately located at the university’s Energy Research and Education Park. Another of the solar systems will be placed near the Cancer and Genetics Research Complex, with the final one sitting between two residence halls, Rinker Hall and Broward Hall. The panels will combine to produce 157,000 kilowatt-hours of power per year, or the equivalent of nearly 14 homes. The project would cost the university $650,000 if Progress Energy was not picking up the tab. The arrays will save the school around $15,000 per year. Students in the university’s Rinker School of Building Construction will use the panels to study the installation of solar equipment.

This is not the Gators’ first foray into the solar energy field. The university earned the Public Choice Award at the Solar Decathlon Europe in 2010. It also won first place in the communications and social awareness contest, along with a second place finish in the Energy balance contest. The competition involved 17 universities from around the world, with the Gators being only one of two representatives from the United States. Each university’s team constructed an 800-square-foot, zero-energy consumption house, with solar energy being the main source of power.

“While the competition is about producing energy to turn on a light switch, it’s the how and the who I’ll take with me. It’s about who we’ve met, and how we’ve overcome obstacles together. This is what will sustain a global society,” said Dereck Winning, student leader for the UF team and doctoral student in the College of Design, Construction and Planning.

The team was led by professor Robert Ries from the M.E. Rinker Sr. School of Building Construction at the College of Design, Construction and Planning. One hundred and twenty five students participated in the Gators’ project.

The University of Florida created its office of sustainability in 2000 and adopted the U.S. Green Building Council’s LEED certification as a requirement for all major construction and renovation projects in 2001. The campus became a certified Audubon cooperative sanctuary in 2005 and earned the second highest grade awarded by the Sustainable Endowments Institute in its 2009 College Sustainability Report Card. The university plans to produce zero waste by 2015 and strives to achieve carbon neutrality by 2025.