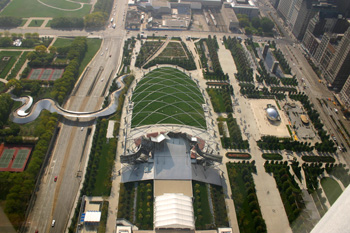 CHICAGO — Chicago has become a hot bed for the green roof industry, leading the nation in overall coverage, with over 2.5 million square feet of garden space located on top of its buildings. In addition to winning the total volume award, the “Windy City” is known for boasting what Engineering News-Record has named the single largest green rooftop in the world, in its beautiful Millennium Park.

The city of Chicago ensured its park would be truly unique when it decided to build the entire area, including an 11,000-seat music venue, on top of a series of parking garages and an old rail yard. The park was named for its original intent, to celebrate the date it references. Despite the fact work wasn’t completed until 2004, the park accomplished its goal of moving Chicago into the future, as beautiful structural art designed by Frank Gehry, and sculptures created by Anish Kapoor and Juame Plensa that have captured the imaginations of everyday visitors and artists alike.

At least seven Hollywood films have shot scenes on location in the short time since the park was completed. The financial benefits of this cultural currency are also hard to ignore, as the New York Times reported in 2008 the park had already created $1.4 billion in new residential development and increased the value of previously existing real estate in the area by $100 per square-foot. The park has also received rave reviews for its accessibility. The welcome center offers wheelchair loans and everything from the lawn at the Jay Pritzker Pavilion outdoor music venue, to the mesmerizing visual distortion of the Cloud Gate’s underside is wheelchair accessible. If you want to wind along the serpentine path of the BP Bridge or turn your face to the sky under the majestic waterfall of the Crown Fountain, being in a wheelchair won’t stop you.

Millennium Park is part of the larger Grant Park system and was built over a series of railroad tracks and parking garages on the same ground where two of the Chicago White Stockings’ (now the Chicago White Sox) home fields originally stood, dating back to 1871. The area has been associated with parks and recreation ever since, as it was included in the plans for Grant Park in 1909 and turned into a parking facility for that park in 1997. By 1999 the city was already courting Franky Gehry, considered by many to be the most influential architect of modern times, to help design a rooftop park on top of the railroad, which would feature an orchestra shell.

The stunning beauty, cutting-edge artistry, and open-space freedom of the 24.5-acre park feels so seamless and organic, that it’s easy to forget the entire spectacle is also a green rooftop. Green rooftops have many environmental and economic benefits including a lower volume of storm runoff, noise reduction, energy savings related to temperature regulation, and additional habitat for birds and insects within the urban environment. 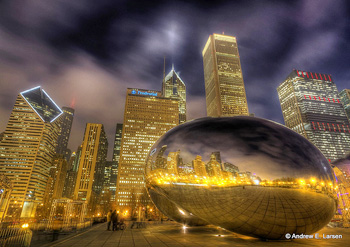 Though Chicago currently holds the title for largest single green roof in the world with Millennium Park, and most overall square feet of green roof space in the country, the city refuses to stand still. Mayor Rahm Emanuel recently announced the city had 14 commercial buildings sign up for the Obama Administration’s Better Buildings initiative, which aims to increase the efficiency of American commercial and industrial buildings by 20 percent, in time for the year 2020. The mayor says the projects will create 1,000 jobs, save $5 million annually in energy costs for the structures in question, and will be funded by the property owners and managers, not the local government. The Better Buildings program includes federal bonds and tax incentives to encourage private sector involvement.

Among the city’s current private industry leaders in green roofing, the Chicago Bears are probably the most well known. This is fitting because Chicago’s Soldier Field is to grass what Green Bay’s Lambeau Field is to snow. Some of the most enduring images in sports history focus on Walter Peyton, Dick Butkus, or Jim McMahon rising from the turf with chunks of grass-laden sod clinging to their uniforms or helmets, undeterred by being literally driven into the ground by an opponent. It seems fitting that parts of the stadium itself now qualify as a green roof as they and a nearby park sit atop an underground parking garage. The structure was awarded a Green Roofs for Healthy Cities’ Award of Excellence in 2004.

Smaller businesses are also pulling their weight, as local restaurant Uncommon Ground, which grows plants and produces honey above its restaurant, earned the distinction of being called “The Country’s First Organic Roof Top Farm” by the Midwest Organic Services Association in 2008.

The city government has also contributed to the greening of its skyline, as the Chicago Cultural Center and City Hall both boast rooftop gardens.